Pandemic sparks surge of female entrepreneurship in the UAE – report

Economic headwinds and inequitable workplaces fuelled a surge in female founders during the pandemic as working women sought to take control of their careers, according to new global data from LinkedIn.

The data published in the World Economic Forum’s 2022 Global Gender Gap Report, shows that globally the pandemic sparked a surge in the growth of women founding their own businesses. The pandemic saw an acceleration of a longer-term trend, with the share of founders growing by 68 per cent for women and by 46 per cent for men in 2020 compared to 2019 in the UAE.

Women’s careers faced many challenges during the pandemic as they were more likely to work in service sector jobs, such as retail and hospitality, which were most affected by lockdowns. The pandemic also saw many women bear the double responsibility of work and caregiving, forcing them to seek greater flexibility than they were offered by their employers. Meanwhile, the pandemic also generated new business opportunities, as industries were upended and adjusted to operating digitally, which helped to reduce some startup costs – like physical offices. Together, these drivers saw women set up their own businesses at an unprecedented rate. 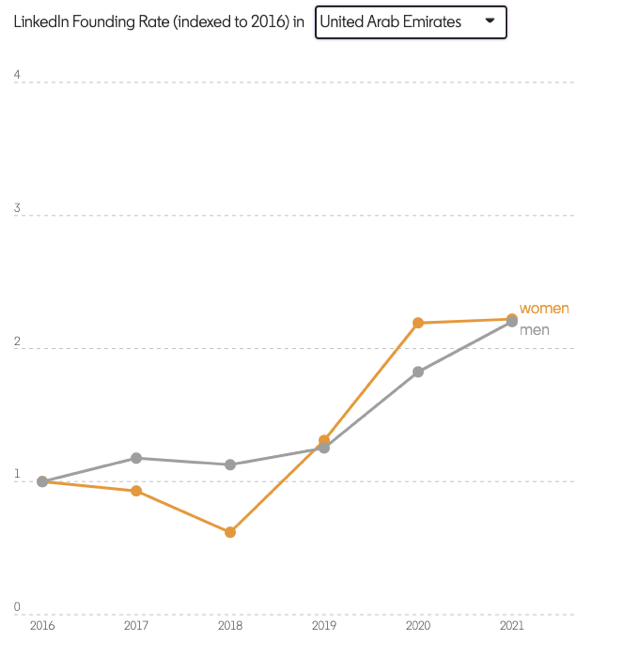 In the UAE, the government has made significant strides towards encouraging equity in the workplace, passing several laws between 2019 and 2021 including equal pay and a 50/50 representation in the Federal National Council, and requiring listed companies in the country to have at least one female board member. It also enacted legislation which prohibits all forms of discrimination in the workplace on the basis of gender, race, color and national origin.

The data also highlights gender bias in internal promotions, with men in the UAE being almost a quarter more likely (22 per cent) to receive internal promotions to leadership roles than women in 2021 on average. Globally, men are even 33 per cent more likely to be promoted internally. The sectors that saw the largest share participation from women in the UAE were education (54 per cent), wellness and fitness (50 per cent) and healthcare (44 per cent). But even within these sectors, female leadership was still below parity at 44 per cent, 38 per vent and 26 per cent respectively.

Sue Duke, head of Global Public Policy at LinkedIn said: “The pandemic hit working women harder than men, as traditional gender roles took hold and female-dominated sectors bore the brunt of lockdowns. The serious lack of women in leadership positions continues to be a real problem, yet data shows that male colleagues are far more likely to be promoted into leadership roles.”

“Given the economic and workplace turmoil of the past few years, women have sought to take control of their careers and set up their own businesses. While some women were pursuing their passions or seeking out greater flexibility, many women became ‘necessity entrepreneurs’, due to a need for income or because of a lack of opportunities at work. We have to recognise that many of these entrepreneurs had their hand forced by inequitable working environments and we must take urgent steps to make workplaces work for women.”

“While the global data is deeply concerning, it points to where progress can be made. It’s clear that taking a hard look at hiring and promotion practices is a critical factor, as is making flexible working the norm for everyone.”

Targeted action is needed to address the global gender imbalance
The Global Gender Gap Report and LinkedIn’s data show that targeted action is needed to make workplaces and societies more equal. The data highlights the need to focus on inclusive and fair hiring practices, as well as internal mobility programmes, and flexible working in order to make progress. Practical steps include removing bias from job descriptions, having representative candidate slates and including women on interview panels.

This also includes creating targeted mentoring and training programmes for women working at the pre-manager level, as well as increased awareness and training about unconscious bias for hiring managers and interviewers at this level.

Flexibility will also be critical to making progress. LinkedIn data shows that women are 24 per cent more likely than men to apply to remote roles, underscoring the importance of flexibility to women and the role it plays in making workplaces equitable by attracting a diverse talent pool.