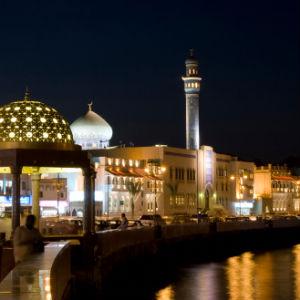 “The growth momentum witnessed in 2011 appears to have sustained in the first quarter of 2012 notwithstanding deteriorating global macroeconomic conditions, arising mainly due to (the) sovereign debt crisis in Europe,” said the 2011 annual report, seen on Sunday.

“The overall outlook for Oman remains positive in 2012 despite heightened downside risks to global recovery.”

The report did not give a specific growth figure for the first quarter. Gross domestic product grew a real 5.5 per cent in 2011, according to an International Monetary Fund estimate, after a five per cent rise in 2010.

However, Oman may be adversely affected if oil prices fall because of worsening global conditions, the central bank said. In addition, the private sector in the sultanate has yet to regain confidence fully, it said.

“Profits earned by the private sector continue to remain sluggish. This is holding back private investment in Oman despite large government expenditure.”

Oman, which gets about three-quarters of its government revenue from crude oil exports, faced strikes in the oil sector in May and June.

The price of Brent crude plunged $40 to as low as $88 per barrel between March and June but has since recovered to around $98. Oman, where oil and gas account for about half of GDP, sold its crude at an average $103 per barrel in 2011.

“Going forward, the major policy challenge before the CBO is to strike a balance between sustained growth momentum and price stability in Oman,” the report said. “Reflecting global slowdown, the overall outlook on domestic prices remained benign in the more recent period.”

Annual inflation in the desert country, which has to import essential commodities, eased to a two-year low of three per cent in April from a peak of 5.3 per cent in August 2011.