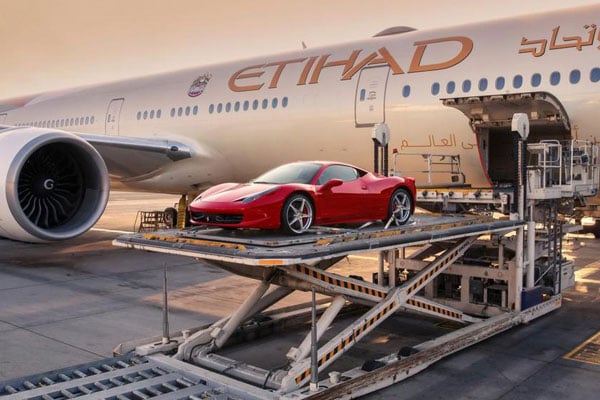 Foreign summer vacations, for most, involve a fair bit of driving. For the hoi polloi, that means looking up car rental rates and booking that pocket-friendly hatchback.

But for the well-heeled, they’re not slumming it in a rental. They’d rather just fly their supercar on holiday with them.

Etihad Cargo, the cargo division of the Abu Dhabi carrier, has unveiled a new service called FlightValet. It allows passengers to transport their supercars on a moment’s notice across from the UAE to destinations across the world.

This new service is an extension of a similar one which Etihad Cargo launched two years ago which saw the carrier transport supercars from the UAE to the doorstep of its drivers who went on holiday in European destinations including Geneva, London, Paris and Zurich, among others.

After seeing the success of that programme launched two years ago, Etihad Cargo now decided to set up FlightValet which has a dedicated team that’s been put in place to oversee the transport and delivery of the vehicle in foreign locations.

Abdulla Mohamed Shadid, Etihad Airways’ managing director of cargo and logistics, said, “FlightValet is the latest addition to Etihad Cargo’s suite of high-value products, which includes our arts and musical instruments product. FlyCulture, launched last year with the opening of the Louvre Abu Dhabi, and our signature pharma and life sciences product TempCheck.”

If you decide to leave your supercar behind instead of taking on vacation with you, read all about the secret supercar storage facility in Dubai that takes care of and pampers your supercar for you.