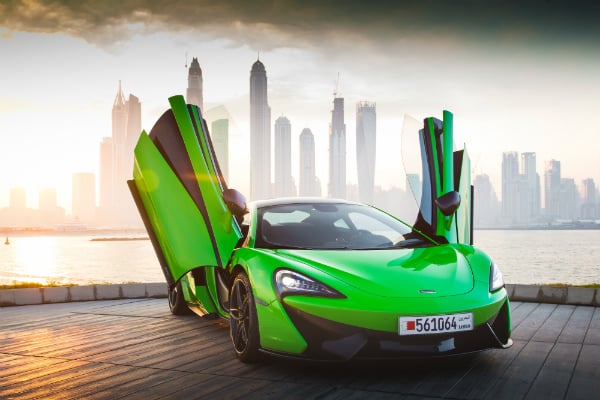 For those in the sports car game that have been watching new boy McLaren take on the supercar big boys over the past six years, things are about to get serious.

McLaren’s 570S is the company’s big move into the mainstream, taking on the likes of the Porsche 911 turbo, AMG GT, Audi R8 V10 and Aston Martin V12 Vantage.

It has been inspiring to watch the current iteration of McLaren road cars grow from nothing in 2011 to today, where they have produced the MP4-12C, 12C, 650S, 675LT and P1 in such a short space of time.

That is how a Formula One team goes into the road car business, with the ability to react at lightning pace to market need. And after establishing itself at the top end against Bugatti, Ferrari and others the 570S allows McLaren to take on
the volume sports car big hitters at their own game.

Using a 562bhp version of the 3.8-litre, twin-turbo V8 from the rest of the range, the entry level McLaren does away with the expensive stuff used on its bigger brothers like composite bodywork, instead having an aluminium shell, while the clever hydraulic suspension makes way for conventional anti-roll bars and the active aero is also missing.

What stays is the dual-clutch, seven-speed box attached to that gorgeous engine driving through the rear wheels, a carbon fibre tub and of course McLaren’s trademark dihedral-opening doors. These are also now easier to use thanks to sills that sit 80 millimetres lower and cut further into the door opening.

The engine has been retuned to deliver sharper throttle response with 30 per cent new components, but it keeps its flat plane crank, which is a big part of the McLaren’s character in terms of power delivery and that distinctive sound.

Despite being the baby in the range, the 570S is actually longer and marginally taller than the 650S as well as being very similar in width. So the slightly more spacious feeling inside is not an illusion, although it is helped by the new floating centre console which does away with that cocooned race car feeling.

It also makes the cup holders useable – not that I tried – and there are some who would find that a benefit, even in a two-seater sports car. Plus there is a small parcel shelf behind the seats for a jacket or two.

As you would expect given the pedigree of the engine, the 570S is still a scorcher and in our unofficial tests was not far off the benchmark figures we achieved in the 675LT. There is some turbo lag below 3,000rpm but let it wind out to its 8,000rpm redline and it is an absolute joy to peddle quickly.

Independent tests over 400 metres have shown it to match the Ferrari F12 and be quicker than the AMG GT-S and Porsche 911 Turbo S at 11 seconds compared to 11.7 for the Mercedes and 11.4 for the Porsche.

The standard carbon-ceramic brakes are powerful enough to easily haul in every bit of sudden velocity you might inadvertently accrue on either road or track.

Despite using the conventional suspension, the car’s handling is outstanding and its grip level is eye wateringly good. It offers a flat ride even in normal mode, while rotating the adaptive dynamic panel dial around to sport and race stiffens things up markedly to the point of being uncomfortable on some of the poorer quality roads around town. These top two modes are best left for track days.

Overall, the McLaren 570S is a welcome addition to the sports car market as an alternative to the V10 Audi R8 and even the king of the segment, the Porsche 911 turbo S.

And knowing how McLaren react as a Formula One team, if there are any shortcomings, you can bet – just like the updates made to the 12C and 650S – that they will address them in double quick time.

The 10 Fastest Cars In The World