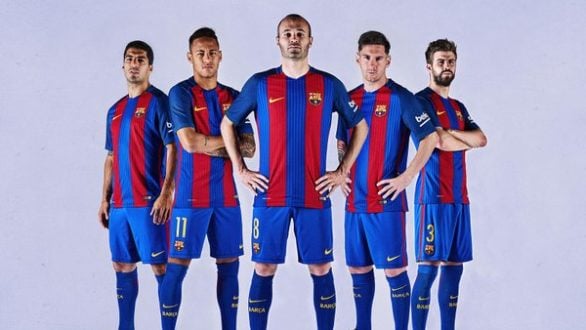 Qatar Airways has not renewed a sponsorship deal with FC Barcelona with the Gulf state’s logo absent from the football club’s new kit.

Barcelona’s current deal with Qatar Airways – worth approximately $40m per year – is due to expire in June.

There were talks about renewing the deal for roughly $90m- $70m per year, but according to reports, the negotiations broke down.

Some reports claim that talks failed because of criticism about Qatar’s treatment of migrant workers in the country.

The style is similar to the model worn by the team in the 1991/92 season, when the club won its first ever European Cup at Wembley.

The new shirt has gone on sale at FCBotigues by fcbarcelona

Barcelona initially entered into a $230m five-year agreement with sovereign wealth fund Qatar Sports Investments in 2011, marking the first time that a paid sponsor’s logo appeared on the team’s shirts in 111 years.

The Gulf state invests heavily in football and in January this year, signed up as a “platinum” sponsor of German club Bayern Munich.

State-owned Hamad International Airport signed a “long-term” sponsorship contract with the club, officials confirmed. However, no details were disclosed about the value and duration of the deal.