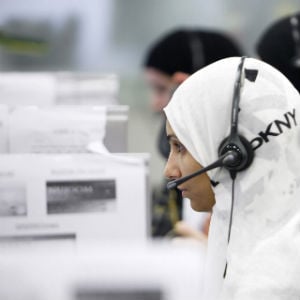 Earning a good salary is the most important criteria for 59 per cent of the women looking for a job in the MENA region, according to a new survey by Bayt.com and YouGov.

While 31 per cent of women also prioritise long career growth, 28 per cent give importance to getting health insurance for their whole family, said the ‘Women in the MENA Workplace 2012’ survey.

Retirement benefits are important to working women aged 46 and above, it added.

“Women across the MENA region are breaking stereotypes and embracing their careers more wholeheartedly than ever before. There is a desire for equality and it seems that, for the most part, this desire is being met by employers,” said Lama Ataya, Bayt.com.

Regarding the reasons for employment, the majority of the women, 57 per cent, said that they were looking to ‘gain financial independence.’ Six out of 10 Arab women residing in the GCC also chose to work in order to ‘broaden their perspectives in life’, while most Asian women, 63 per cent, aimed to financially support their household, said the report.

Women aged 25 or below are looking to ‘put their education to good use’, while those in the 36-45 age bracket want to secure their children’s future.

Almost half of the surveyed women, 44 per cent, stated that fewer opportunities for job promotions are the biggest challenge they face in their work.

While 38 per cent of the respondents also named stressful and demanding work environments, 33 per cent said that lack of flexible working timings, limited opportunities to perform, and insufficient job training and coaching are also issues.

In terms of pay, women in Qatar, UAE and KSA feel that they receive less than men working within their company. However, 56 per cent of the survey’s respondents believe that they are treated equally to their male counterparts in the workplace.

Data for the survey was collected online from May 17 to May 30, with 2,185 respondents from UAE, KSA, Kuwait, Qatar, Oman, Bahrain, Lebanon, Syria, Jordan, Algeria, Egypt, Morocco and Tunisia.