For most mortals, it is a sense of accomplishment to recognise a citrus note in a bottle of perfume. But for those who create perfumes professionally, it goes much further. Take for example Christine Nagel, in-house perfumer at Hermès, who has a nose that has been trained to identify whether that citrus note belongs to bergamot, mandarin or orange – and that’s still the easy part. Once she, for example, identifies an orange, she can tell you whether it’s from Morocco, California, Italy or Israel. Impressive as that is in itself, consider that this trained chemist can smell a perfume and write down the entire formula for it.

There are believed to be only around 500 professional perfumers globally – there are more astronauts than that – and Nagel is undoubtedly among the most sought after. Her list of creations includes the likes of Narciso Rodriguez for Her, Miss Dior Chérie, several creations for Jo Malone and Giorgio Armani Si. When Pierre-Alexis Dumas offered her a chance to join Hermès, she gladly accepted.

Getting to this point in her career didn’t come without a fight. After studying organic chemistry, Nagel joined the Swiss company Firmenich. It was there that one day she saw the legendary perfumer Alberto Morillas, who also worked for Firmenich, asking two young women in the laboratory to smell his trial fragrances. “I saw their smiles, I felt their emotions, I perceived their pleasures. At that precise moment, I knew and was sure that this job was for me.”

But a mere desire to become a perfumer wasn’t enough, as Nagel quickly learned about the industry which at the time was dominated by men. “I had to overcome many obstacles to become a perfumer, but not only because I was a woman. I also had to overcome the fact that I was not the daughter of a perfumer and not born in Grasse, in the south of France.
“But I have a tenacious character. The thing that has always motivated me is the drive to prove my ability. To be chosen for my talent and my signature above all else, with no other considerations.”

It is that tenaciousness and sheer skill which led Nagel to become the first female perfumer at Hermès in 2014, a move that seemed to round off a circle. “I have talked previously about the smell of Borotalco from my childhood. That’s one of the first scents to have remained etched in my memory. It is linked to specific memories of family. The most evocative [though] is still the scent that emanated from my grandmother’s handbag when I opened it. It had a powdery, sweet smell that has remained deeply rooted in my mind. When I arrived at Hermès, I discovered that exactly the same story had inspired the creation of the first women’s fragrance by Hermès: the legendary Eau d’Hermès, which is based on the scent of the inside of a woman’s handbag.”

At Hèrmes, Nagel has worked on several fragrances including Eau des Merveilles Bleue, Galop d’ Hèrmes and Twilly. But it’s what Nagel pulled off earlier this year that is nothing short of a coup.

Hèrmes recently unveiled H24, the first men’s fragrance from the Parisian house in 15 years. “Yes, 15 years have passed since Terre d’Hermès. I wanted to give a Hermès perspective on an enhanced men’s fragrance, a youthful fragrance, one that appeals to a new audience,” says Nagel. 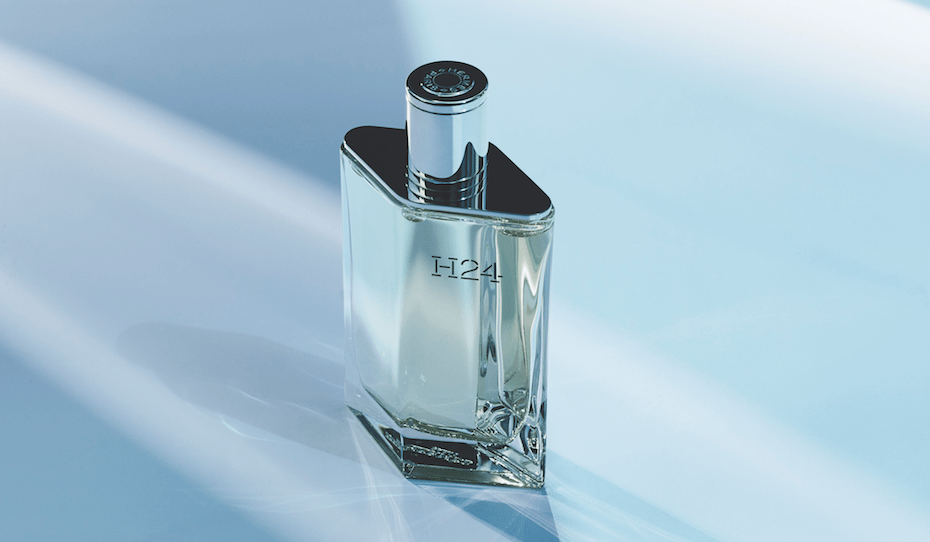 While woody or spicy would have been the safe bet, trust Nagel to wager a dare. She instead focused on four key ingredients with H24 – sclarene, clary sage, rosewood and narcissus. “For H24, I did not deliberately set out to use other raw materials than those generally used in men’s fragrances. I simply found in plants a natural reflection of movement, of the resonance of rising sap. I have stayed with the masculine codes of freshness, but with sidesteps and the distinctive signature of clary sage. Choosing a plant ultimately triggered a different kind of work and a cascade of new options. With H24, when choosing a plant, it follows a new logic for preserving the fluidity of the plant,” notes Nagel.

The lengths to which she has gone to research and source these ingredients might explain the many years that it took to debut this latest men’s fragrance. Sclarene is biosynthesised in the foliage of the Hall’s tōtara conifer tree native to New Zealand and the rosewood used is obtained from a specific certified sustainable producer in Peru.

The Hermès Parfums studio is located at the top floor of the Hèrmes HQ at 24 rue du Faubourg Saint Honoré. A floor below her is the office of Hermès’ men creative director Véronique Nichanian, who Nagel says played a role in the development of H24. “It was the creative vision of the Hermès man expressed by Nichanian for more than 25 years that inspired me. We talked at great length and spent time together. I found many creative parallels and surprising similarities between us, particularly in relation to materials – being able to touch the material simply by looking at it,” she adds.

The Middle East is a region that Nagel says holds close connections to the world of perfumes. “The history of perfume, the knowhow around perfumes, the unconditional love of perfume – [are all] clearly Middle Eastern. It is a true art and everyone speaks its language. This is the case in the Middle East and the UAE. My latest Hermessences are a form of tribute to this culture.”

Hermès, Nagel notes, affords her complete creative freedom and a sizeable war chest to research her creations. Importantly, the brand isn’t angling for approval from the masses by undertaking extensive testing campaigns for each of its fragrances. Instead, a group of around five people test all the fragrances. “We don’t do market research, nor do we run focus groups. Imagine the incredible freedom I have, everything is open to me. So the challenge could be the dizzying headiness of freedom. But is choosing not the first act of creation?,” Nagel asks rhetorically.

Apart from Morillas, Nagel shares that she was also particularly influenced by another world-renowned French perfumer – Michel Almairac – who has worked with brands including Dior, Burberry and Gucci. “[Almairac] trusted me, believed in me, trained me. I became his pupil and he taught me so much, especially a form of rigour and purity in my work. If I could not answer a question instantly about the presence of a raw material, he made me remove it. Since then, I’ve worked with few raw materials, because I am convinced that what is essential is necessarily simple,” explains Nagel. H24 is an example of her life’s learnings distilled in a bottle.