All the updates from Cityscape 2017 - Gulf Business 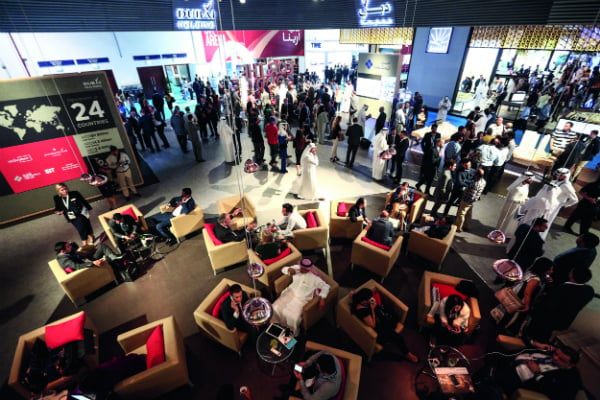 6:00pm That’s all for what has been an action packed day.

Check the website tomorrow for all the action from day two.

5:45pm: Just as the day was coming to a close we also spoke to Bahrain Economic Development Board’s executive director for tourism and leisure business development Jerad Bachar.

He said the country had $26bn of real estate projects in the pipeline, including major new residential, mall and retail developments, and had not seen “a lot of fluctuation in sales” despite the tougher economic environment.

“A lot of developers have concerns from an economic standpoint but still see the market as being quite strong,” he said.

Bachar believes Bahrain will benefit from its recent ranking as the best country in the world for expats by online community platform Internations.

The country’s attractiveness to expats is one of its biggest selling points to companies, he suggested, highlighting how a key aspect of its appeal was the kingdom’s “open and welcoming society” where expats and citizens mingle.

He said the project was designed to turn MotorCity into a “full small city” with amenities to match. It will include a villa community located next to the Dubai Autodrome track that was inspired by the market in Melbourne Australia, where property next to the Formula One circuit comes at a premium.

“We have to take advantage, you’ll find it not relaxing to be beside the track but other people will love it,” he said.

More broadly the chairman believes conditions are improving and he does not expect the firm, or the market, to be affected by the introduction of value added tax.

5:15pm Another project launch has been announced by UAE conglomerate Majid Al Futtaim, although the details are scarce.

The company said it will develop an all new, mixed-use community in Dubai, which will be located in a “key residential growth corridor”.

The development will also feature retail, leisure and entertainment facilities.

Majid Al Futtaim said it is currently in talks with contractors with plans to unveil the masterplan in H1 2018.

4:20pm When it comes to the Dubai real estate market Dubai Properties is very much in it for the long-term and “confident the market will be fine” despite recent pressure on sales and rents, executive director for sales Marwan Al Kindi told Gulf Business in an interview.

The company recently transported the first water villa to its Marasi Business Bay development over a distance of 6,000km from Finland and has begun registering interest in the units at Cityscape.

Al Kindi said DP was “very optimistic” for this quarter when it has a number of units for sale including Dhs1.1m villas at its Villanova community.

And he confirmed it has no plans to follow Emaar and abandon Cityscape for digital channels, with the executive insisting the show generates “good sales” and interest.

3:40pm As we had mentioned earlier, this is the first year that developers exhibiting at Cityscape can sell UAE-based projects on-site to investors. And it seems like buyers are taking advantage of the opportunity.

Azizi Developments has announced that phase one of its Dhs12bn waterfront project Azizi Riviera has been sold out today.

The developer has also sold 50 per cent of inventory of phase two of the same project, it said.

The project, which is located in the Meydan One district, began construction in July this year with the completion of phase one and two scheduled for the second half of 2018.

Once complete, the project will deliver at least 6,273 units of studio, one and two-bedroom apartments.

He said the project was inspired by interest in the developer’s Floating Seahorse, a floating villa with underwater space. Around 180 of the units will be underwater.

It will be fixed in place by flexible cables and “move centimetres with the tide”.

Kleindienst said there was “a realistic chance” the project would be finished in 2020 but it would need to be pushed. He hopes for it to be open in time for Expo 2020.

The company plans to contract boatbuilders for the individual segments that can be constructed separately and put together on location.

Speaking of the firm’s other project on the World Islands, The Heart of Europe, he said three of the six islands will be completed and handed over next year and the entire project would be ready by Expo 2020.

The CEO finished by saying that if there was enough demand for its World Islands projects, Floating Venice would “not be the last one” suggesting there could be more to come.

3:00pm The list of new launches continues. And as expected, there is one ‘world’s first’.

European property developer Kleindienst Group (developer of The Floating Seahorse) has launched The Floating Venice – what it claims is the world’s first underwater luxury vessel resort.

Valued at Dhs2.5bn ($680m), The Floating Venice will be located in The World islands, 4km offshore from Dubai and will feature luxury cabins, restaurants and underwater pools.

See all the pictures and a video here: In pics: World’s first ‘luxury underwater vessel resort’ launched in Dubai

1:50pm The worst may be over for the Dubai real estate market say the team at Cluttons.

Faisal Durrani sasys Dubai property appears to be “coming to the end of its current cycle” amid expectations the market will flatten out or even grow next year.

Still, a lot is hinging on sentiment in the build-up to Expo 2020 translating into demand as expected, says Murray Strange and a correction in the amount of supply coming into the market is expected in the build-up.

He suggests it will likely be commercial prices and rents that will see the most impact from the introduction of VAT with the potential for some discounted rates to compensate.

1:30pm The UAE’s construction market seems to be going strong, according to a new report.

The total value of active building projects in the UAE reached $227.9bn (Dhs836bn) at the beginning of September 2017, a report by research company BNC Network has found.

The number of projects currently underway stands at 7,878, with the majority located in Dubai and the Northern Emirates.

However, in terms of value, $121.1bn worth of buildings are being developed in Dubai, $64.3bn worth of projects in Abu Dhabi and the rest $42.6bn are being built in the Northern Emirates, the report added.

12:30pm It’s only midday on day one of Cityscape, and we have already seen several new project launches.

Located in Business Bay, the 63-storey South Bay will comprise 926 units, from studios through to three bedrooms, of which 448 will be residential, 133 will be serviced apartments, and 345 will be hotel units operated by a multinational.

Meanwhile Union Properties – which has unveiled a new brand identity – announced a new masterplan for its flagship MotorCity development in Dubai with a completed value of more than Dhs8bn. 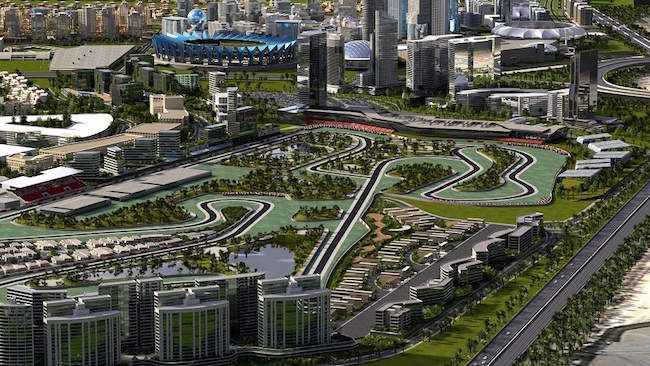 The new MotorCity masterplan will comprise of 44 new high and low rise buildings, more than 150 villas, and a wide range of residential, commercial, entertainment and hospitality facilities.

Dubai-based Shuaa Capital also revealed plans for a new skyscraper on Sheikh Zayed Road, close to Business Bay. The project, called Dubawi, will be a mixed-use hotel and residential tower.

Another announcement came from Dubai developer Meraas, which has revealed plans to build a second cruise terminal at its upcoming Dubai Harbour project.

11:44am Are conditions improving in the Dubai property market? Not particularly says CBRE’s Mat Green.

“Looking forward certainly from a rental perspective things will continue to decline,” he says, thanks in part to new supply.

While he doesn’t expect “a huge amount of movement” from a sales perspective.

Any pickup in either metric he suggests will be driven by a rise in the oil price or improving economic conditions, but little change is expected into 2018.

Regarding the impending introduction of value added tax he believes most investors will take a long term view and not make decisions based on the impending deadline.

And regarding a shift to digital platforms for property sales he says developers can no longer afford to sit in a sales office but online accounts for a relatively small percentage of transactions.

To end on a positive note though, he said the car park at this year’s Cityscape was significantly busier than last year perhaps suggesting optimism to come.

She said recent trends the firm has noticed include increasing interest in mid-market property by end-users looking to save money in the long run.

The firm is also expecting increased interest from buyers in the coming months ahead of the introduction of a 5 per cent value added tax rate.

And finally, Boothelo said Emaar’s absence from Cityscape was not necessarily an indication that trade shows were in decline.

“Physical interaction” she suggested was still a key part of the sales process even if would-be buyers are conducting more and more research online before they approach an agent.

10:50am A quick look at some of the models on the show floor. 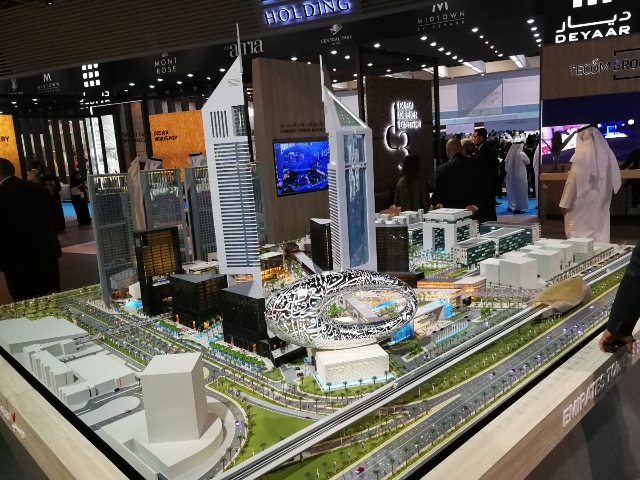 Here is what the finished Museum of the Future and business district around Emirates Towers will look like. 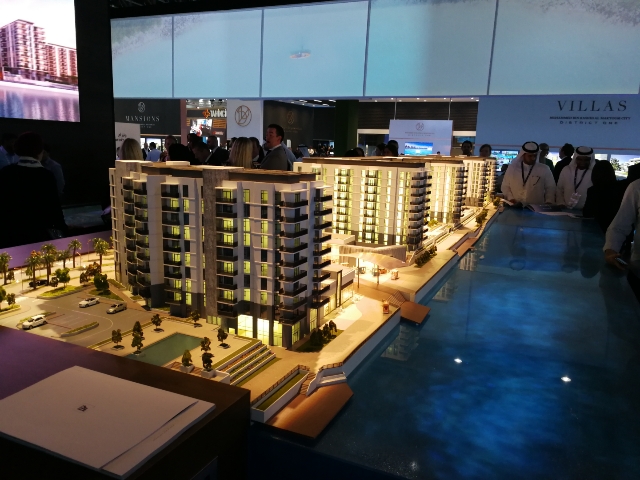 This is Aldar’s recently announced Waters Edge on Yas Island. 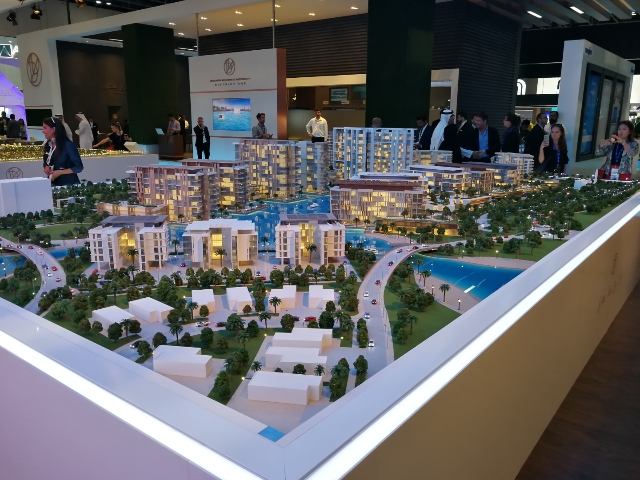 And this is District One at Dubai’s MBR City.

10:42am: The show is now picking up and we have the first report of the day.

UAE property portal Dubizzle has released a new study showing some of the most popular communities in Dubai.

The firm said prices in some communities in Q3 of 2017 had actually increased compared to Q1 of last year.

The firm said recent trends showed a rise in demand for mid-market property among end-users.

10:05am: According to the organisers of Cityscape, up to 300 local and international exhibitors have set up their stands at the the show.

But with all the talk about Dubai’s property market slowing down, it will be interesting to see how well Cityscape’s new provision – allowing sales on-site for UAE projects – works.

9:20am We’re about to get underway at this year’s Cityscape after what has already been an interesting build-up.

So far, we’ve had a number of major announcements from developers already including several yesterday.

These included $1bn of new projects from Nakheel including a major new community and mall in Discovery Gardens.

There was also the District 2020 legacy project revelation from the Dubai Expo 2020 team.

And of course, who could forget the J One twin tower launch in the evening from RKM Durar? Certainly one of the most visually impressive projects announced in recent months.

Outside of launches, another major talking point today is likely to be the absence of arguably Dubai’s most well-recognised developer from the conference. Emaar Properties, the company behind Dubai Mall and the Burj Khalifa, will not be participating this year as part of a strategy to move all its marketing efforts onto digital platforms.

Read: Dubai developer Emaar not participating in Cityscape this year

More thoughts on this and the day’s major launches to come.