The Gulf island kingdom of Bahrain has been named the best destination globally for expats in a survey by network InterNations, while many of its neighbours were ranked among the worst.

The country jumped from 19th place last year to first in 2017’s Expat Insider survey of 13,000 expats after topping the ease of settling in index, with a quarter of expat arrivals saying they started feeling at home straight away despite 33 per cent having never lived abroad before.

The country stood third in the working abroad index, second in the job and career and work-life balance subcategories and jumped 13 places in the personal finance category.

Sixty eight per cent of expat respondents in the country were generally satisfied with their financial situation and 41 per cent said they earned a lot more than they would in the same role back home, while nearly nine in 10 (87 per cent) were found to be satisfied with life in general.

Other notable rankings included a jump from 34th to 10th for family life, from 22nd to sixth for quality of education and 32nd to 11th for availability of childcare and education.

However, in other areas like cost of living (28th), state of the economy (25th) and job security (18th) it performed less favourably.

The small island kingdom has been among the hardest hit in the Gulf Cooperation Council by the lower oil price as it lacks the sizeable fiscal reserves of some of its peers.

Bahrain was followed by Costa Rica, Mexico, Taiwan and Portugal at the top of the 65-country table and placed some way ahead of its Gulf neighbours. 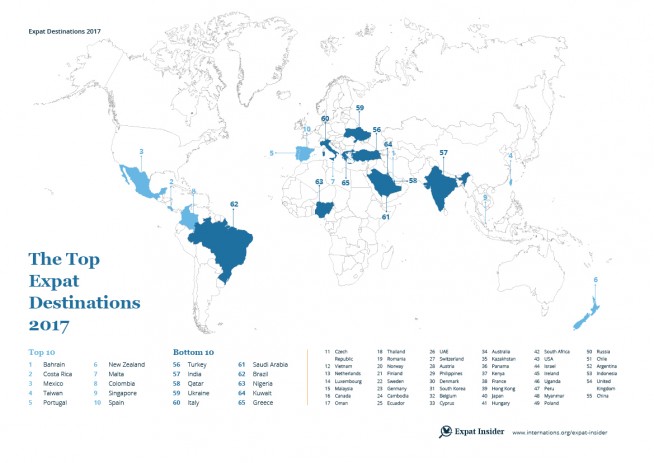 Oman stood closest in 17th place followed by the UAE, up 14 places to 26th.

Further down the list, Qatar ranked in 58th and Saudi Arabia stood in 61st while Kuwait, which maintained its position in the bottom three for the fourth consecutive year, was 64th after climbing one place from the lowest ranking in 2016.

The Gulf countries were particularly valued for their earning potential with a third of expats in Qatar earning more than $100,000 a year and more than six in 10 in each Gulf country believing their income was a lot higher than a similar position back home.

For softer factors like friendliness, family life and personal happiness, however, Bahrain was the exception in the region.

Kuwait ranked the unhappiest country for expats worldwide, with 49 per cent happy with their life in general.

It was also last for leisure options and the most negative for friendliness towards foreign residents despite climbing by at least one place in all indices including 15 positions for job security to 32nd.

In Qatar and Saudi Arabia, 37 per cent and 38 per cent of expats respectively said they did not feel at home in the local culture and 11 and 16 per cent believed they never would.