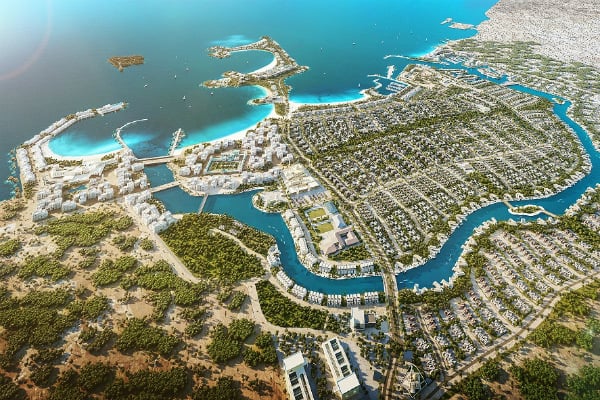 The company said its Sahel Al Emarat riviera was designed as a second-home destination.

It will span 370 hectares and 3.4km of beachfront spread across three districts.

AlJurf Gardens, Jiwar Al Qasr and Marsa AlJurf will have their own architectural designs and amenities, while the wider project includes two marinas, private berths, a town centre, hotels, retail, a wellness resort and clinic, museum, fishermen’s village and serviced residences and villas.

Public and private beaches, beach clubs and restaurants, community centres, parks, mosques and a private school are among the other planned features.

“We look forward to the influence AlJurf will have on the country’s coastal property landscape and welcome the opportunity for buyers to invest in a one-of-a-kind project.”

Imkan said construction would begin next year. The Dhs2bn ($544.5m) first phase of AlJurf Gardens, comprising 292 villas and plots, is scheduled for completion in 2021.

The developer’s other major project is the Makers District on Abu Dhabi’s Reem Island. It features residential, hospitality, commercial and retail space covering an area of 18 hectares.

It is also building the 46,000sqm Sheikha Fatima Park and the Nudra development of 37 villas on Saadiyat Island.

Imkan is the second developer to introduce a major development on the border between Abu Dhabi and Dubai after Aldar said in April it would build a $2.72bn community.

The Alghadeer master plan, which incorporates an existing community of the same name with 2,000 homes, comprises 14,408 villa, townhouse and maisonette units across an area of 1.3 million square metres.

Aldar signed a memorandum with Hyperloop Transportation Technologies to incorporate what is claimed to be the world’s first commercial hyperloop system into the development.