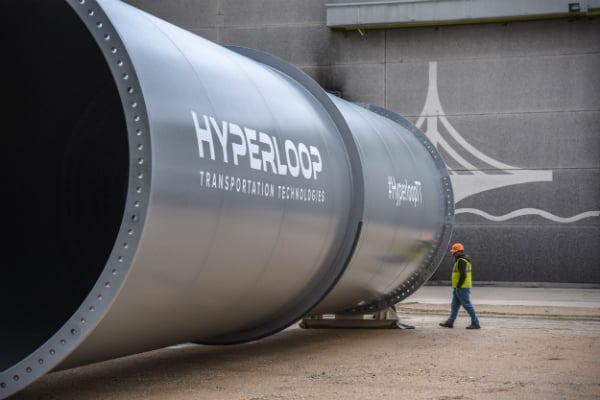 Abu Dhabi developer Aldar Properties has signed a memorandum of understanding with Hyperloop Transportation Technologies to bring what is claimed to be the world’s first commercial hyperloop system to Abu Dhabi.

The agreement comes as HyperloopTT competes with rival firms to make the hyperloop high speed transportation concept, involving the use of pressurised tubes to transport human and freight cargo at speeds of up to 1,100kmh, a reality.

Wednesday’s deal is for a hyperloop site within a new urban centre under Aldar’s Seih Al Sdeirah landbank near the border between Dubai and Abu Dhabi.

When fully executed, Aldar said the hyperloop site would include a full-scale commercial hyperloop system, a hyperloop research and development centre, a demonstration and visitor centre and an innovation hub.

HyperloopTT is planning to construct a fully working hyperloop system across Abu Dhabi in several phases starting with an initial 10km section at the site.

“Alghadeer sits at such a strategic point within the UAE – close to major growth areas of both Abu Dhabi and Dubai, that it makes sense to pair it with rapid transport opportunities,” said Aldar CEO Talal Al Dhiyebi.

“We believe that Hyperloop technology can have a major positive impact on the lives of all of those living within our communities, and we look forward to this possibility becoming a reality.”

An eventual system could link on to other emirates and even Saudi Arabia, HyperloopTT indicated.

“This agreement creates the basis for the first commercial Hyperloop system in the world here in the emirates, with the goal of eventually connecting Abu Dhabi to Al Ain, Dubai, and Riyadh, Saudi Arabia,” said Bibop Gresta, chairman of HyperloopTT.

“With regulatory support, we hope the first section will be operational in time for Expo 2020.”

The agreement rivals similar efforts in Dubai, which has signed draft deals with rival firm Virgin Hyperloop One to establish a system in the emirate.

To date no company has taken their hyperloop system beyond the initial testing phase.

HyperloopTT said earlier this month it had received its first set of tubes for construction of a 320m test system, set to be operational this year. A second phase next year will span 1km and be elevated on pylons.

Rival Virgin Hyperloop One appears slightly further ahead with a test track in Nevada completed last year and pods transported in tests at speeds of up to 387kmh.

Prototypes of the firm’s eventual hyperloop pods were unveiled by Dubai’s Roads and Transport Authority in February.

Aldar unveiled a $2.7bn master plan to expand a development close to the proposed hyperloop site on Monday. The developer plans to expand Alghadeer from 2,000 homes to 14,08 villas, townhouses and maisonettes over the next 15 years.

The new hyperloop project and expanded Alghadeer are hoped to benefit from developments in the surrounding area including the Dubai Expo 2020 site, Dubai South, Khalifa Industrial Zone and Dubai Wholesale City.