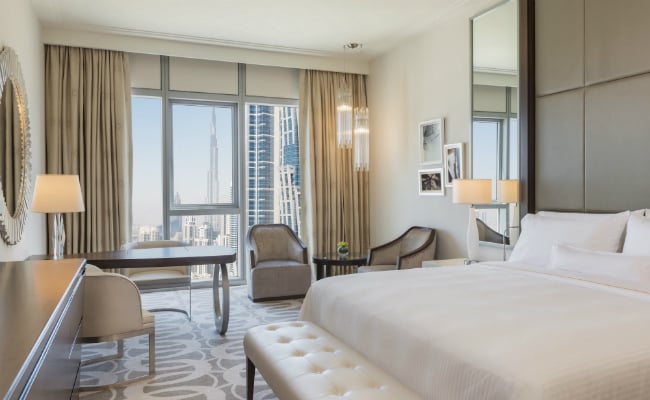 US hotel operator Hilton is to take over management of three hotels at Dubai’s Al Habtoor City.

The news comes after Al Habtoor Group said earlier this month that it was ending a management deal with Marriott International for the The St. Regis Dubai, W Dubai Habtoor City and The Westin Dubai Al Habtoor City on July 31.

Al Habtoor Group confirmed at a press conference on Tuesday that the properties would come under Hilton and be renamed Habtoor Palace – LXR Hotels and Resorts, V Hotel – Curio Collection by Hilton and Hilton Dubai Al Habtoor City respectively.

All the restaurants and bars at the three properties would remain the same and guests will be able to earn Hilton Honors points on their stay from August 2018 onwards.

“We are pleased to extend our partnership with Hilton to three additional hotel properties at Al Habtoor City, our flagship hospitality, leisure and residential development located in the heart of Dubai,” said Mohammed Al Habtoor, vice chairman and CEO of the Al Habtoor Group.

“This is a record transition into a new portfolio of brands, a testament to the strong relationship and trust between Al Habtoor Group and Hilton. The announcement increases our partnership with Hilton from five hotels to eight hotels around the world.”

Hilton said the properties would bring its total room footprint in Dubai to more than 5,000 by the end of the year.

Khalaf Ahmad Al Habtoor, founding chairman of Al Habtoor Group said: “Dubai is a safe haven for tourism and investment. The decision of Hilton to choose Dubai as one of the first locations for its upcoming luxury collection brand [LXR Hotels & Resorts] is a confirmation of Dubai and the UAE’s robustness and appeal.”