Have I Got News For You - Gulf Business 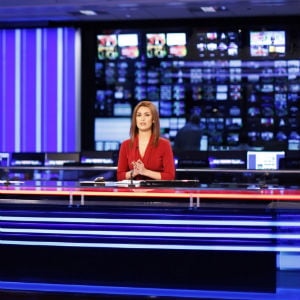 “The region demanded an Arab news product which incorporates both the technological developments and the fast changing media consumption habits that are transforming how news is gathered and disseminated,” Sultan Ahmed al-Jaber, the channel’s chairman, said in a statement.

Sky News Arabia, which has a team of around 400 journalists, producers and technicians, will offer a “new and fresh approach to news across the Arab world,” he added.

But it may not be an easy task to pull in the viewers. The channel will be competing with regional broadcast leaders Al-Jazeera and Al-Arabiya, which have been operating for many years and currently enjoy the entire news market space.

So will Sky News Arabia be able to create a niche for itself?

“It may well be one of those situations where the market grows and develops to make room for the new players,” explained Alexander McNabb, the director of Spot On PR agency.

“It’s kind of like the mobile market in the region. In Egypt and Jordan there were 80,000 mobile lines each, but when the competitor came, the overall market grew to over a million lines within the first year. So the fact is that competition grows the market and grows the demand,” he said.

The region has also been traditionally underserved with great news channels and great journalism, he added.

For instance, Al Jazeera’s coverage of the unrest in Egypt was effective, he said.

“If you look at the dearth of news out of Syria, there’s obviously a kind of need of what Jazeera did at Tahrir. So let’s say Sky brings more of that, then it would then help in the process of opening up that market, giving us viewers more reason to view them,” McNabb added.

But it’s not just Sky News Arabia that will be adding to the competition, Saudi billionaire Prince Alwaleed Bin Talal is also launching another Arabic news channel, Al Arab, early next year.

The channel, launched in partnership with Bloomberg, will be headquartered in Bahrain.

“A great many changes are needed in the Arab world, and these can be achieved by orderly means and not necessarily by violence. Revolutions are not only disruptive and exact a heavy toll in lives and material, but they also often have unknown and unpredictable consequences,” Alwaleed said.

So is that the approach that is needed?

“I think good honest reporting, high quality journalism that doesn’t consider it to be the voice of anybody except the truth, that will be nice,” said McNabb.