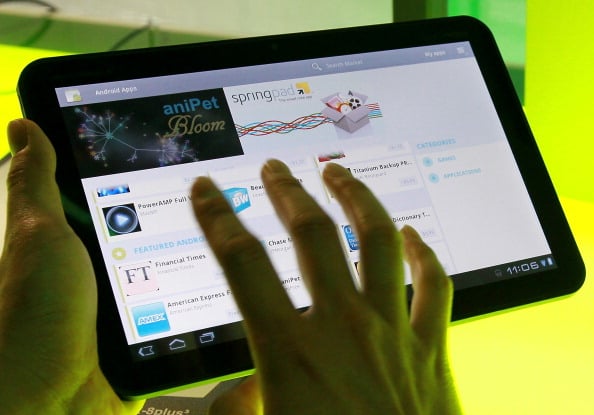 Tablet makers are predicting that their products will soon eclipse the personal computer. And if sales of the handheld devices continue their recent ascent that day could be fast approaching.

In second place were tablets powered by Google’s Android operating system. The platform’s 10.5 million units represented a 39 per cent share of global tablet shipments during the fourth quarter.

In third place was Microsoft, which managed a meagre one per cent market share. The company and its hardware partners will be hoping that the release of Windows 8 later this year will boost sales.

The Gulf is particularly smitten with the devices. The region makes up a big chunk of the shipments of tablets to the overall Middle East, Europe and Africa area, which is forecast to reach 33 million units in 2012, an increase of 53 per cent year-on-year.

Toshiba is forecasting 20 per cent growth in regional mobile computer sales on the strength of demand for tablets and 3D-enabled laptops.

GCC consumers treat purchases of tablets a little differently to the rest of the world. Youssef El-Arif, sales manager for the Middle East and Africa at Belkin, an online retailer in the Gulf, said: “The biggest difference between the local and global markets is that people in the Gulf buy tablets because they like them, not just because they need them. Therefore, you’ll often find someone has an Ipad and a Blackberry tablet.”

Arif and others believe the introduction of the tablet sparked a fundamental shift in how people live and work. For one, it made them smarter shoppers. Price comparison sites are often frequented by visitors in-store on tablets.

Some say the relationship with the working environment has also been transformed. Sam Alkharrat, managing director for the MENA region at the big German enterprise software company SAP, said: “Tablet manufacturers are not selling these products just so people can play games. There’s something about the size and using your fingers on the touch screen that makes these things popular for other uses.
“Previously, there was a chain around peoples’ necks when they entered the office and sat at their computer. Tablets broke that chain. Normally items like these are picked up by gamers and then it spreads to the business world. But tablets hit business almost right away,” said Alkharrat.

He said companies have spent millions on tablets and simply handed them out to their employees. “They’re telling staff, do your expensive reports or sales presentations on these devices.”

It was on these fundamentals that in 2010 SAP bought database and enterprise software provider Sybase for $5.8 billion.

Tablet sales may be strong in the Gulf, but businesses are yet to come around to their marketing power. Alexander Rauser, CEO of Prototype Interactive, a digital agency, said: “The tablet market is still slow. The region is still catching up to the growth of smart phones. The release of Window 8 this year could change everything. The competitiveness of the market will require that brands invest in order to transfer their digital assets for the use on tablets.

“It’s not just about short-term marketing, it’s more about them taking their content and digital assets and making them convenient on a tablet. Brands in the region have in the past underestimated the importance of their websites. They’ve treated sites like brochures, not as an investment that will yield return.

Rauser added: “You have to give a unique user experience scaled to the device in their hand, whether it’s a PC, tablet or smart phone.

If brands can get their tablet marketing right then the devices could shift spending habits. Leaving your desk to browse and potentially shop might catch on. The figures suggest this is possible. Research by Strategy Analytics revealed that consumers increasingly prefer tablets over netbooks and entry-level notebooks or desktops. It is estimated that Apple sold more iPads in the fourth quarter than HP, the world’s largest PC maker, sold computers.

Not surprisingly, the Gulf has come catching up to do if it’s to become Apple’s or Microsoft’s favourite region.