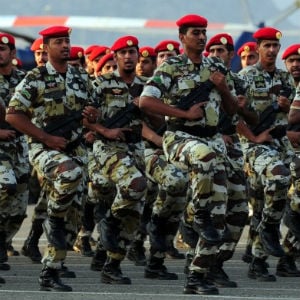 Gulf interior ministers are discussing the possibility of establishing a GCC police force, according to Dr Abdullatif bin Rashid Al-Zayani, GCC secretary general. The move will aim to improve security measures in the region, he said after a meeting of the interior ministers of the six Gulf states in Riyadh.

“The ministers stressed the importance of the GCC-unified approach towards different security issues with upholding the areas of cooperation through the common security strategies,” the official Saudi Press Agency quoted Al Zayani as saying.

“They also confirmed the need for constant readiness to monitor and identify dangers and threats to security and paying attention to information security to counter biased media campaigns that seek to split the ranks and the dissemination of sectarian thought by broadcasting fabricated news in order to destabilise the security and stability of the GCC countries,” he said.

The UAE deemed the visit a “violation of its sovereignty” and Saudi Arabia also criticised the move, with its cabinet calling the trip a “transgression of efforts towards a peaceful solution of the issue of the UAE islands.”

“This provocative visit has stirred up feelings of Arab anger towards Iran and exposed deceit and falsehood in Iran’s claim that its relations with the Arab Gulf countries are friendly and peaceful,” he said.

“Any harm that comes across any of our countries is harm that touches us all,” Saudi Arabia’s Crown Prince Nayef said in a speech at the Riyadh meeting.

“We stress that Saudi Arabia and the rest of the council countries are standing in a unified line with Bahrain and the UAE to protect sovereignty and stability, considering their security a part of the council’s security as a whole,” he added.