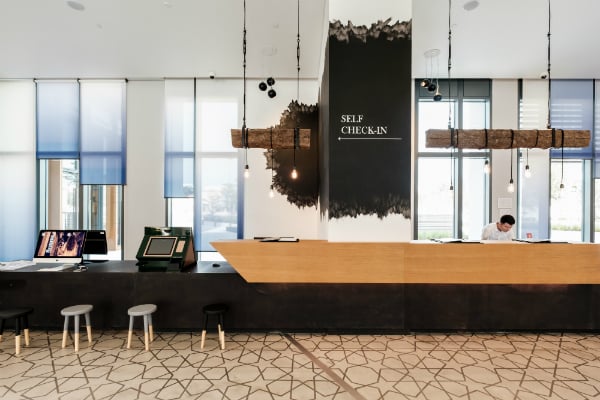 The first of two Zabeel House by Jumeirah hotels – a Mini version with 150 rooms – has opened in Dubai’s Al Seef district and the neighbouring four-star hotel with 200 rooms, located slightly closer to Dubai Creek, aims to open mid-May before Ramadan.

Anyone who’s visited Jumeirah’s five-star city hotels and resorts will find the newcomers markedly different in terms of design, scale, product and price. This is completely deliberate, as the operator sails down new mid-market and ‘upscale casual’ revenue streams in line with the wider growth in the affordable mid-tier and neighbourhood hospitality.

The next Zabeel House will open in The Greens in the third or fourth quarter.

The regeneration of Al Seef – this stretch has 420 shops and 80 F&B outlets – has been developed by Meraas, and there are nods to other projects – such as Boxpark – in the cut-out container which serves grab-and-go F&B and bespoke chocolates from Patchi next to the café. The Dubai hotelier’s arrival reminds me of the regenerative opening of its Creekside hotel, a short drive away, and the new pair should further raise the hospitality profile of the inner city.

“Zabeel House wouldn’t work on the Palm – it’s about the neighbourhood. Here you have the Creek, embassies and souks, it must bring more than just a hotel,” said general manager Alessandro Cabella, adding that the newcomers are 10 minutes from Dubai International Airport. There are plans to take the brand to London.

After swinging on one of four swings in the Mini lobby, Cabella escorts me to the ground floor cafe where I’m served an incongruous mix of ‘Creek shake’ Oreo ice cream and flavoursome Ethiopian coffee – which as a combination I’m not sure I’d recommend, but coincided with the air of novelty.

We were served a selection of pan-Asian flavours at C.u. where main courses are priced in the Dhs55-90 range (serves continental breakfast too). The reception is staffed but there is a self check-in area which should prove convenient, and another convenient touch is the drink and snack machines on each floor.

The look and feel will appeal to younger travellers – beyond the swings, giraffe, sheep and ducks are among the breadth of animal-themed sculptures which add levity – although Jumeirah is reluctant with the ‘millennial hotel’ label. Guests staying in resorts at the other end of the city will be able to shuttle to this older part of Dubai, and vice versa (each guest can access Wild Wadi for Dhs75). 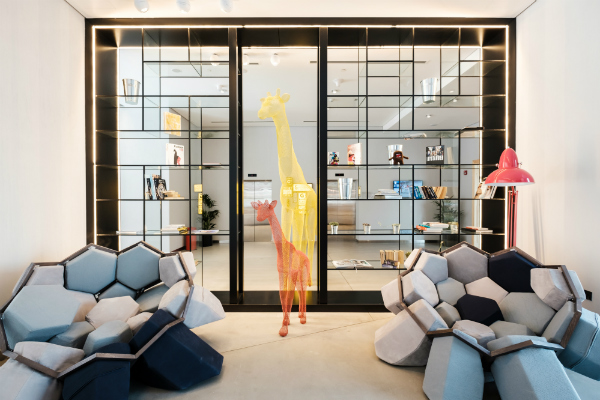 The rooms are compact but don’t feel small, helped in part by imaginative designs of the drinks area, ‘Smeg’ red retro minibars and colourful Dubai map on the ceiling. More letters and slogans can be found in the lifts and larger suites. There are some classic Dubai touches, such as the leather-seat gym equipment which wouldn’t look out of place in any upscale hotels.

Work on the four-star hotel is continuing. The two stand-out features are the expansive ground floor gastropub and seventh floor poolside, where an Argentinian concept (Sol) is also located – both of which offer fine Creek views. Pools in both hotels are narrow and certainly not in the league of Jumeirah’s plush resorts, although the four-star hotel’s is longer.

Corporates will gravitate to this hotel rather than the Mini as it has seven meeting rooms, and the ones at the front have abundant natural light. We walked past a series of lobby sculptures and attractive montage of black-and-white cityscape photos.

The Zabeel House pairing are an attractive addition, although it’s clearly going to draw more leisure guests than business; unless your work takes you to the embassy or Bur Dubai district, then it’s not going to attract corporate travellers from Jumeirah Emirates Towers or other Sheikh Zayed Road hotels – though in this day and age of laptops on the go, it may well appeal to cost-conscious corporates.

The surrounding district was quiet during my visit although you can imagine it turning into a night-time pedestrian magnet. Ultimately prices are competitive (from Dhs280 for Mini booking made before June 14 and Dhs350-400 thereafter and Dhs600 for Zabeel House) which should ensure good occupancies.

The bigger concern will be whether, in time, Dubai can sustain this trendy neighbourhood mid-tier push, a movement which started with Rove Hotels, whose pipeline remains aggressive – and yesterday it announced a cinema will open at its Downtown hotel – and continues to gather steam. Zabeel House will court local artists in line with other operators.

But this space remains relatively untapped for now, and vital if Dubai is to hit its 20 million visitors target by Expo 2020.