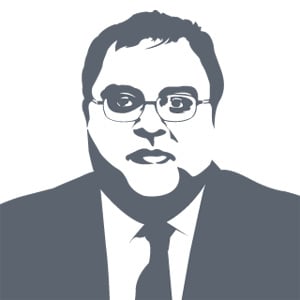 “Sell in May and go away” is an old Wall Street folk wisdom. While the American stock market usually declines in late spring/summer, the decline in 2012 could be a lot more traumatic. After all, now that China is slowing, the Federal Reserve refuses to oblige the markets with another lollipop of easy money, stratospheric crude oil prices increase recession risks, earnings/operating margins disappoint, geopolitical risks in the Gulf simmer and the most austere budget since Franco has not halted an ominous rise in Spanish government bond yields. Brent crude oil prices are near $125 despite Saudi Arabia’s pledge to offset the EU’s sanctions on Iranian shipments and the dramatic rise in Libyan and Iraqi oil production to 1.2 MBD and 2.8 MBD respectively. This means that oil and gas shares could make money for investors once Wall Street stock indices correct by five to eight per cent next month.

Take Schlumberger (symbol SLB), for instance. The world’s leading oilfield services colossus is a classic technology intensive global growth stock, with its franchises in seismic, pressure pumping, reservoir management, deepwater drilling and its extensive relationships with the world’s most prominent state owned energy companies in China, Russia, the Gulf, Southeast Asia, Brazil, Mexico, Venezuela and West Africa. The shares have fallen from 90 to a recent 68 as North American Henry Hub gas prices have plummeted to decade lows, with a concurrent decline in Gulf of Mexico and land drilling rig count. Yet Schlumberger shares now trade at a mere 12 times forward earnings, a third below their historic valuation range. Schlumberger could earn between $5.4 and $5.6 EPS in 2013 and I doubt if forward valuations will fall below 10 times even if the S&P 500 index falls 100 points from its recent 1410 highs. So Schlumberger shares could well trade as low as 56-58, where their valuation metrics become irresistible. I personally believe Schlumberger is a compelling buy in the 60-64 range for a 85 target.

Chesapeake Energy (CHK) has been gutted by the secular fall in North American gas prices. Chesapeake now trades at Cinderella valuations at six times earnings. While gas prices will remain depressed, Oklahoma’s preeminent natural gas company is divesting its stakes in the Permian Basin and New Mexico to boost its crude oil/liquid fuel production and slash its capex debt load. Asian smart money has begun to buy into Chesapeake Energy at a $15 billion valuation for America’s second largest natural gas driller after Exxon. Temasek, Singapore’s sovereign wealth fund, is a strategic shareholder in the company because its shale oil acreage is at least twice the value of its shares listed on the NYSE. Ultimately, the stock market will unlock value or a Big Oil CEO will make a takeover bid.

Exxon Mobil (symbol XOM), is overvalued at 85 as oil production declined even while Brent traded above $125 and West Texas above $105. In any market correction, I envisage Exxon could lose 8-10 points. So Exxon’s downside risk is near the $75-78 range. As the world’s leading integrated supermajor with more than four MBD in production and 23 million barrels in reserves, Exxon at 75 implies a dividend yield of three per cent, making the shares irresistible to institutional investors.

France’s Total ADR fell seven per cent after the tragic gas leak in its North Sea Elgin field. Total valuation metrics are modest at seven times earnings because it has historically not demonstrated an impressive production growth record and its oil/gas reserves are often located in politically risky former French colonies in North and West Africa. The monetary policies of the Federal Reserve and Iran geopolitical risk has led to the stratospheric rise in crude oil prices. However, if Brent falls $10 and global markets correct, Total ADR in New York could trade as low as 42-44 levels. This means a fabulous seven per cent dividend yield on France’s bluest chip global oil and gas champion.

Gazing Into The Crystal Ball

Getting Your Investment Strategy Right