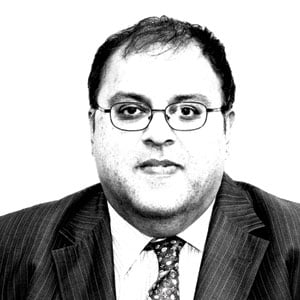 The hype over India’s economic miracle has proved as cruel an illusion as a desert mirage.

The rupee has lost 25 per cent of its value against the dollar in the past 18 months. Offshore investors have fled Dalal Street. Inflation has surged to eight per cent, while GDP growth is the lowest since 2002. The current account deficit is a shocking $180 billion. Fiscal discipline has broken down. The ruling UPA-Congress coalition is mired in a succession of corruption scandals, as its U-turn on retail and the tax witch hunt against Vodafone, is repelling foreign investors. The government has lost credibility with the world’s financial markets. India is on the brink of a vicious bear market.

The rise of centrifugal forces is a recurrent theme in Indian history, that split the empires of Ashoka, Vijayanagar, the Delhi sultans, Mughals, Marathas, and – with the partition and creation of Pakistan – even the British Raj. A similar process is happening now, as the state governments in West Bengal, Karnataka and Tamil Nadu openly defy Manmohan Singh’s economic strategies in a quest to lure populist vote banks.

This retrograde communal and sometimes even criminal DNA of Indian politics stunts its economic potential, despite six decades of success in Westminster-style parliamentary democracy and three wars with Pakistan.

The epic political, fiscal and economic crises of 2011-12 convince me that India will lose its valuation premium in the emerging markets, even as global risks and Greece mean earnings downgrades and a fund manager exodus from Dalal Street. The result could be another 3000 points lower on the Sensex and a protracted bear market in Indian equities.

The reform consensus in India has broken down since powerful politicians in the UPA are fierce opponents of FII and market capitalism. Therefore, even though India’s highly regulated economy survived the Lehman debacle, its current malaise could contribute to an erosion of investor confidence and growth premium in corporate India. A crash in the rupee and the property market could well be the endgame of the RBI’s mismanagement of monetary policy.

The irony is that the dynastic grip of the Nehru- Gandhi clan on Congress and the Indian state has only led to economic catastrophes, from Nehru’s disastrous socialist License Raj to Mrs. Indira Gandhi’s Emergency/civil war in Punjab, from Rajiv Gandhi’s Bofors scandals to Sonia’s populist policies and failing grip on political power. Yet, the BJP, whose most prominent economic strategist, Gujarat Chief Minister Narender Modi, was implicated in a 2002 communal pogroms, offers no credible alternatives to global investors.

In any case, in a state with 500 million citizens under the age of 30, mediocre economic growth and high inflation are a recipe for political chaos. Governance, which reached its peak in India under Lord Curzon, has degenerated into endemic corruption and populist, incoherent economic policies. India trades at an unjustified valuation premium to both China and South Korea. This will not last.

The relationship between the Indian government and its corporate elite (the fabled Bollygarchs) has broken down, with predictably negative implications for business investment and secular GDP growth. A leaked memo alone estimates that the Indian government lost $210 billion in corrupt coal asset privatisation.

The political nexus of India Inc has become toxic and corporate growth rates will fall. The rupee, Asia’s worst performing currency in 2012, could well depreciate in the next two years to 70 versus the dollar, if current trade and budget deficits persist.

Insights: Embedding cyber resilience is key to a security strategy

Privacy-by-design can be a source of value and opportunity, not cost