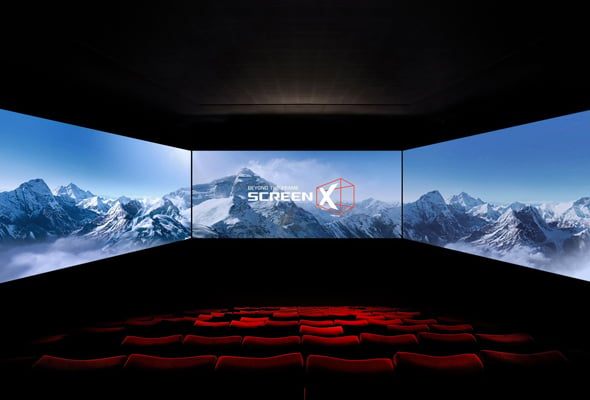 The cinema unit of Dubai’s Emaar has signed an agreement to install a 270-degree panoramic screen at its Dubai Mall location.

The ScreenX system, which sees films projected on three theatre walls to provide a more immersive audience experience, will be among the first introduced in the Middle East.

More than 140 of the systems have been installed globally to date.

The screen partnership between Reel Cinemas and South Korea’s CJ 4DPLEX was announced at an industry even in Barcelona this week, according to the ScreenX website.

“ScreenX will be a leading addition to our technology showcase that assures a stunning 270-degree panoramic film viewing experience that will further cement our market leadership,” said Damien Latham, CEO of Emaar Entertainment.

The exact launch date of the concept was not disclosed.

Reel is no stranger to trying out new cinema concepts having introduced the Middle East’s first dine-in cinema in collaboration with celebrity chef Guy Fieri at the Jebel Ali Recreation Club.

It is also planning to introduce dine-in screens at Dubai Mall and the upcoming The Pointe dining and leisure destination on the Palm Jumeirah.