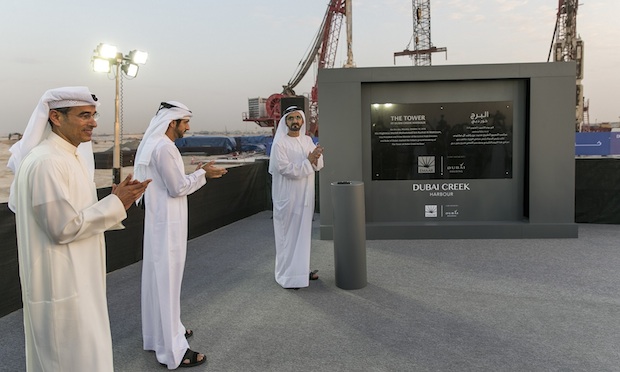 Dubai developer Emaar has laid the foundation for the construction of what is slated to become the world’s new tallest building – The Tower at Dubai Creek Harbour, it announced on Monday.

Launched in April last year, the $1bn mixed-use building will form the centerpiece of the 6 sqkm Dubai Creek Harbour master-development, which is jointly being developed by Emaar and Dubai Holding.

The pile foundations for the new tower have been completed, a statement said.

As part of the foundation work, the pile was tested to a load of over 36,000 tonnes – the maximum carried by a single foundation pile to date, the statement added.

More than 145 barrette piles have been used to form the foundation for the new building, designed by Spanish-Swiss architect Santiago Calatrava Valls.

The first structural facets of The Tower will be visible ” in the coming days” with teams already on-site to accelerate the development work, Emaar said.

Designed to resemble a lily with the image of a minaret borrowed from Islamic culture, the tower will feature specially shaped observation decks. The Pinnacle Room will offer 360-degree views while the VIP Observation Garden Decks will be designed around the theme of the ‘Hanging Gardens of Babylon.’