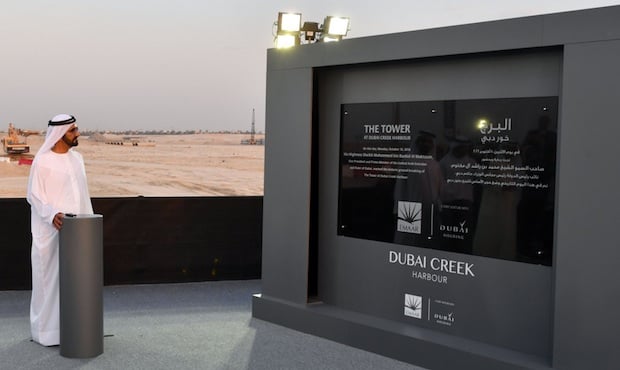 Sheikh Mohammed bin Rashid Al Maktoum, UAE Vice President and Prime Minister and Ruler of Dubai launched the construction of what is slated to become the world’s new tallest building –  The Tower at Dubai Creek Harbour – on Monday.

When completed in 2020, the tower will beat Burj Khalifa (828 metres) as the tallest building in the world. However, the exact height of the new building has not yet been disclosed.

Launched in April this year, the $1bn mixed-use building will form the centerpiece of the 6 sqkm Dubai Creek Harbour master-development, located close to Ras Al Khor. 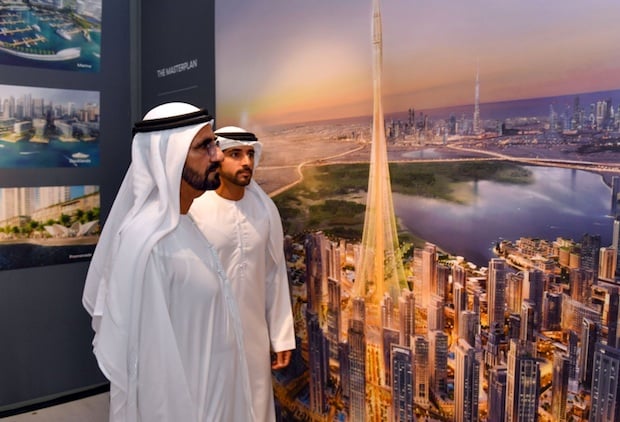 The waterfront development, a joint venture between Emaar Properties and Dubai Holding, is located just off the Dubai Creek.

“Today we placed the foundation stone of what will stand as the world’s highest man-made structure by 2020, the Dubai Creek Tower,” Sheikh Mohammed said on Twitter. 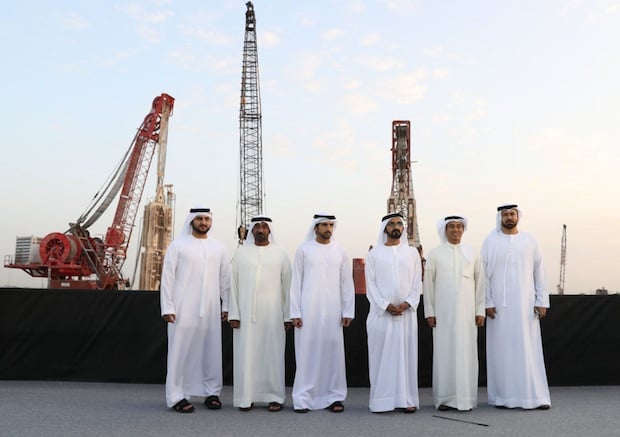 “The new tower sets another challenge in the history of human architecture: a race the UAE deserves to lead.”

He added: “We strive for new achievements. A new heart for our city and global landmark. Humankind has no ceiling or border but our imagination.”

The tower’s design was chosen by Sheikh Mohammed following an international competition and the winning concept by Spanish/Swiss neo-futuristic architect and painter Santiago Calatrava Valls will see the tower shaped like a lily with the image of a minaret borrowed from Islamic culture. 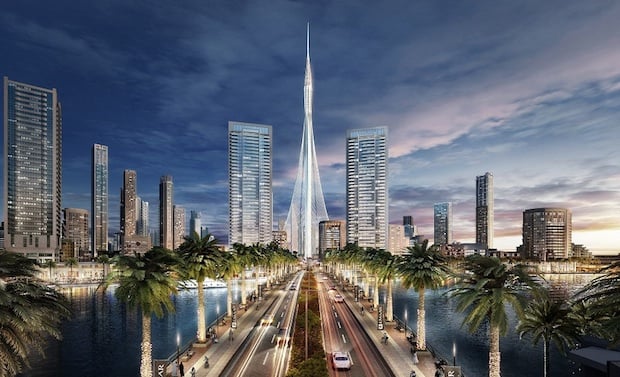 The observation decks at the top of the tower will be shaped to resemble an elongated oval-shaped bud with geometric texture. The Pinnacle Room will offer 360-degree views while the VIP Observation Garden Decks will be designed around the theme of the ‘Hanging Gardens of Babylon.’

The tower will also have illumination and movement lighting, while several ‘green corridors’ will offer pedestrian access and connectivity with Dubai Creek Harbour.

Mohamed Alabbar, chairman of Emaar Properties, said: “From Burj Al Arab, Emirates Towers, Burj Khalifa and now The Tower, Dubai has been the centre of innovation for supertall structures and breakthrough developments in design, architecture and engineering. We are pushing our boundaries in every aspect of this new master-planned development, one of the largest in the world.”

He added: “We will continue to push the frontiers of engineering and construction to complete the project in time for Expo 2020 Dubai.”

With no similar super-tall structures in the world, Emaar has undertaken a new approach to wind-engineering and seismic tests, which have already been completed, a statement said.

Santiago Calatrava Valls said: “The design and architectural features of The Tower demand unique engineering approaches that are currently being implemented on site. Extensive studies were undertaken in preparation for the ground-breaking.”

Every aspect of The Tower is designed to the “highest international standards of safety” – from the choice of materials to the technology being deployed in its construction, the statement added.

The tower will “strengthen the tourism sector, diversify the economy and reinforce the sound economic stature of the UAE globally”, said Mohammad Al Gergawi, chairman of Dubai Holding.

“The Tower at Dubai Creek Harbour, which will be the tallest in the world, represents a new phase in the development vision of Sheikh Mohammed whereby His Highness will present to the world a new icon and to humanity a higher point in its development.

“The Tower is part of a smart city development, providing a new and distinguished lifestyle, and will be completed by 2020 along with a number of strategic and pioneering projects that are being undertaken here,” he added.

The units offer views of The Tower and the Dubai Creek and residents will also have access to a marina with a yacht club.