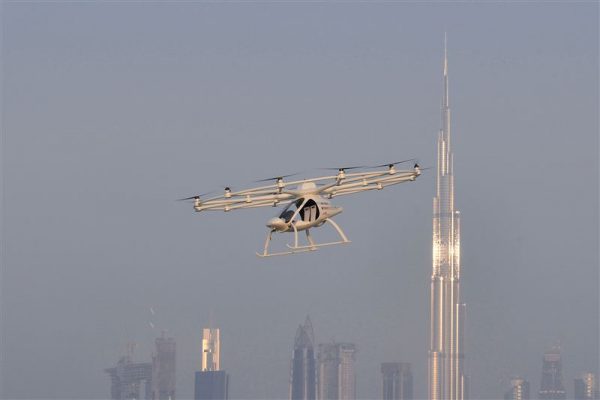 Dubai’s Roads and Transport Authority (RTA) has signed a memorandum of understanding with specialist telecoms firm Nedaa to develop a self-driving aerial vehicle network in the emirate.

The plans come as the authority continues to work with private sector partners on drone taxi collaborations.

Test flights of a vehicle made by German drone firm Volocopter took place in September.

The framework deal with Nedaa will see the two sides work together to provide traffic data and other information using artificial intelligence-backed drones.

It is hoped to meet all the requirements to obtain a licence from Dubai’s Civil Aviation Authority for the “possible use of “pilotless planes along with the supporting network”.

“[The] RTA will also coordinate with NEDAA in developing as many uses as possible for pilotless planes along with the supporting network, besides identifying areas requiring service coverage,” said Abdulla Al Madani, CEO of Corporate Technology Support Services at the RTA.

“According to the MoU, NEDAA will map out time charts for carrying out tailor-made test projects, and generate analyses of traffic and 3D charts of relevance for RTA.

The RTA said in February last year that it planned to launch passenger drones by July 2017.

It has since unveiled a booking app that will eventually allow commuters in the city to book drone taxis but commercial services still appear some way off.

During the tests the Ehang184 completed a 300m vertical climb, carried 530kg, flew a routed flight of 9.3 miles and achieved a high cruising speed of 130km/h, according to The Verge.