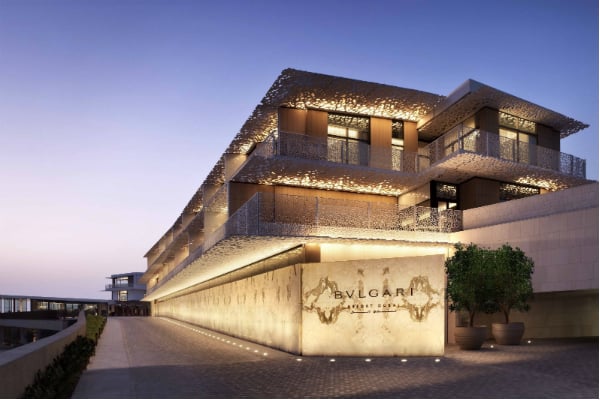 Dubai’s new Bulgari Resort, claimed to be the emirate’s most expensive hotel, will officially open to the public on December 7 as part of a wider project under development by holding company Meraas.

The hotel is the fifth under the luxury Italian brand’s name following its Bejing opening in September and others in Milan, Bali and London in 2004, 2006 and 2012 respectively.

It features 101 hotel rooms and suites and 20 hotel villas with luxury Italian furniture and views of the Dubai skyline or Arabian Gulf from an exclusive seahorse-shaped island location off of Jumeirah Road.

Marriott International, which is managing the property, said last month the hotel would have its soft opening in October.

The villas come in five categories ranging from one to three bedrooms and vary from 175sqm to 540sqm in size. All come with a personal butler service, private pool and gazebo, while the largest Bulgari Villas includes a large living area, sunken bath tub, private garden and larger outdoor pool.

Other features of the resort include a 1,700sqm spa with eight treatment rooms and a 25m indoor pool, a fitness centre and a private beach with villas cabanas, a children’s pool and outdoor pool.

Among the food and beverage offerings are Il Ristorante, which offers concepts from Italian michselin star chef Niko Romito.

“You can count on the fact that they [the hotel room rates] will be by far the highest in the market,” he said.

The resort also features the world’s first Bulgari Marina and Yacht Club with a 50-boat harbour and amenities including an Italian fish restaurant, members lounge, outdoor pool and bar and kids club.

For corporate and other events there is a 360sqm ballroom located in the yacht club and ‘secret’ lemon garden La Limonaia at the main resort.

Guests and visitors will also be able to purchase luxury chocolate at a BVLGARI Il Cioccolato boutique and perfume at a Le Gemme perfume outlet.

Residences surrounding the resort will include 165 serviced apartments ranging from one to three bedrooms, eight four-bedroom penthouses and 15 three-to-six-bedroom mansions. In May it was reported one of the penthouses sold for a then record Dhs60m ($16.3m)

Meraas is separately selling 50 mansion plots on the island.

Bulgari will open its sixth branded hotel in Shanghai next year and its seventh in Moscow in 2020.