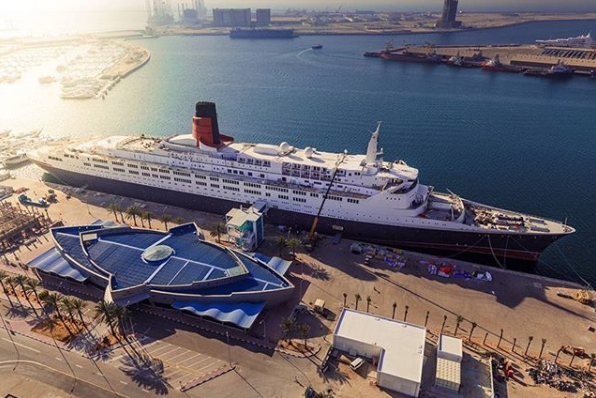 Social media users have been offered a first glimpse inside the world world famous Queen Elizabeth II (QE2) liner as it undergoes a multi-million-dollar conversion into a hotel.

However, there were indications of a revival over the last six months after new signs appeared outside the ship, which now falls under the ownership of Dubai government entity Ports, Customs and Free Zone Corporation.

A new website also went live in February featuring the message ‘coming soon’ before maritime fans reported the ship had been moved in March to undergo conversion work at Dubai’s Drydocks World.

An Instagram post by QE2 Dubai five days ago showed staff welcoming the ship back to Mina Rashid port for the “final phase of her restoration” after a two-week deep cleaning and paint retouch at the drydocks.

After spending the past 2 weeks in Dubai’s Dry Docks for a bit of a deep cleaning and paint retouch, the Queen Elizabeth 2 took one final voyage back to her new home in Mina Rashid…ready for the final phase of her restoration. Here’s our family of Navigators welcoming her back! #stillmakinghistory #qe2dubai #queenelizabeth2 #restoration #shiphotel #experience #dubaidestinations #mydubai #heritage #livinghistory #oceanliner

The social media account has also revealed further details of the ship’s interior.

There will be 12 food and beverage venues, from casual and fine dining, to grand theatres and nightclubs, it said last week.

Another post two days ago offered the first look at the room design, which clearly appears intended to maintain the ship’s original charm.

“Comfortable, refined and replete with the authentic elegance of her former years, the Queen Elizabeth 2 rooms and suites have been thoughtfully restored with all of the modern technological conveniences of today, blended with her maritime interiors,” a caption reads.

While the most recent post on Wednesday confirmed previous reports that the revamp would feature an interactive museum, portraying the ship’s origins, in its lobby.

This will include actual and replicated artifacts and three reproduced spaces including the bridge, a first class cabin and the Queen’s Room.

“The self-guided exhibition will feature evocative sound effects and captivating information panels in both English and Arabic,” according to the post.

When refurbished as a hotel the 293m ship is expected to have 300 rooms in total.

No opening date has been confirmed but the Instragram account has said it will not be long “until her new journey begins”.

The ship’s website is also currently advertising for staff who can provide “a royal experience”.