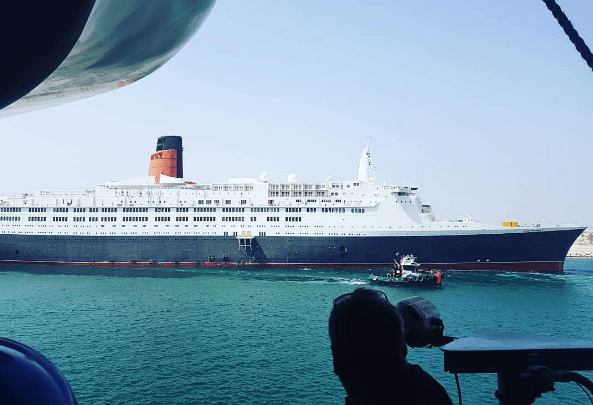 The world famous Queen Elizabeth II (QE2) liner has been moved to Dubai’s Drydocks World as it undergoes a conversion into a hotel.

However, The National reported last September that new signs had appeared outside the ship amid a secretive makeover led by its new owner Dubai government entity Ports, Customs and Free Zone Corporation.

As part of this process a new website came online in recent months, featuring the message ‘coming soon’.

What’s On reported in February that the 292m ship could open as a 300-key hotel with a museum component as early as March 30.

Now new images published on www.theqe2story.com in recent days show the ship being towed to the dry docks to allow work to take place.

Members of the forum said this could involve overhaul painting, the blanking off of openings and the possible removal of the ship’s twin variable pitch propellers so they can be displayed for guests of the hotel.

It was unclear how long the work would take, although a March 30 opening now seems unrealistic.