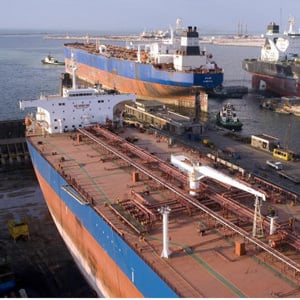 Dubai’s ship building unit Drydocks World will ask its syndicated lenders to sign a lock-up agreement over the coming days and is confident it can secure their support by April 2, the company said in a statement on Wednesday.

The Dubai World unit is in negotiations to restructure a $2.2 billion loan facility in an effort to put an end to long-drawn and complex debt talks.

“Over the coming days the Group’s syndicated facility lenders will be asked to sign up to the lock-up agreement and hence formally confirm their support for the Group’s proposals,” Khamis Juma Buamim, chairman of Drydocks World said in the statement.

Drydocks World’s debt restructuring, initially expected to be completed by April last year, has dragged on as the presence of hedge funds and a lack of government support curbed prospects of an amicable deal.

The firm’s debts stem from a multibillion-dollar loan it took out to fund expansion in Singapore. Its major ship and rig building facilities are in southeast Asian countries such as Singapore and Indonesia.