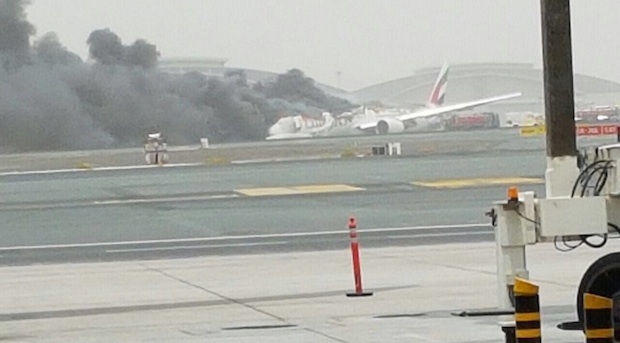 The closure of Dubai International Airport for more than five hours after Wednesday’s crash landing is believed to have cost the emirate about $330m.

The figure was calculated in local newspaper Khaleej Times, using information supplied earlier this year by Michael Rudolf – head of aviation regulation and safety at the Dubai Civil Aviation Authority.

He claimed during the World Aviation Safety Summit in April that for every minute the airport is shut, the cost to Dubai’s economy is $1m. The transport hub was closed between 1pm and 6.30pm after the incident – a time span of five and a half hours.

Emergency measures were put into place after flight EK521 from India made a crash landing at about 12.45pm. Unconfirmed reports suggest there was a problem with its landing gear.

A fire erupted on board when it touched down, and while all 300 passengers and crew were evacuated safely, a firefighter died while extinguishing the blaze.

Despite flights resuming on Wednesday evening, several airlines including Indian carriers Spice Jet, Indigo and Jet Airways cancelled all their flights to and from Dubai on Thursday. The airport is continuing to operate with only one runway while investigators study the wreckage to determine the cause of the crash.

Emirates airline announced on its Facebook page that it would waive cancellation, re-issuance or ebooking charges to passengers who had booked tickets before Wednesday.