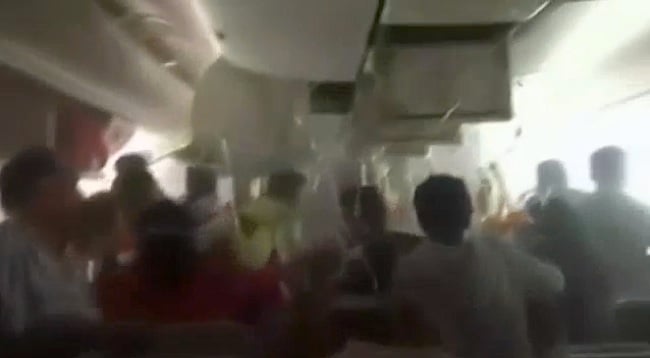 Amateur video taken inside a crashed Emirates Boeing 777 shows chaos as passengers try to grab their luggage from overhead compartments while one woman, apparently a flight attendant, shouts at them to evacuate the plane.

“Jump! Jump! Jump! Leave your bags behind!” the woman shouts, seconds after the burning plane came to rest on the runway of Dubai International Airport after a flight from Thiruvananthapuram in southern India.

The aisles of the plane are packed with a crush of people, some of them screaming, and oxygen masks have deployed from the ceiling of the cabin, which is dimly lit as electric lighting has been extinguished.

The passenger who took the video keeps his camera on as he slides down an inflatable emergency chute from a door of the plane, past a wing on which an engine can be seen burning.

At the bottom of the chute, passengers shout out as they search for relatives and help each other away from the crash site.

All 300 passengers and crew were safely evacuated from the plane, though one firefighter was killed on the ground. Authorities said they were investigating Wednesday’s crash, which occurred after the crew apparently attempted unsuccessfully to abort a landing.