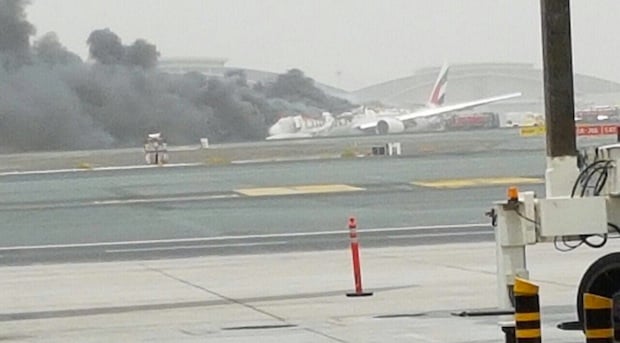 An Emirates aircraft flying from India with 300 people onboard crash-landed at the Dubai International Airport on Wednesday afternoon.

Flight EK521, operating from the Indian city of Thiruvananthapuram to Dubai, had 282 passengers and 18 crew onboard – all of whom are safe. Fourteen people were admitted to hospital for injuries.

However, a firefighter tackling the blaze after the accident lost his life. He was identified as UAE national Jassim Essa Al-Baloushi.

. @HHShkMohd: Our griefs on Jassim is as our proudness of the sacrifices of our youth on duty to save&protect lives pic.twitter.com/4ldmZUmi8T

“We are grateful to God for his mercy and confirm that there were no fatalities among the passengers and crew on board,” the General Civil Aviation Authority (GCAA) said in a statement.

“We are however, very sad to announce that one of the firefighters lost his life while saving the lives of the others.

“On behalf of the General Civil Aviation Authority, I would like to offer my heartfelt condolences to the family of deceased. I salute his ultimate sacrifice that kept many from harm’s way. Our thoughts and prayers are with his family,” said Saif Al Suwaidi, the director general of GCAA.

Meanwhile, the Dubai Media office tweeted the “Emirates crew and emergency teams at Dubai Airport are well trained to deal with such incidents at the highest professional standards.”

The Boeing aircraft was delivered to Emirates in March 2003 and had undergone maintenance last year.

According to Emirates chairman and CEO Sheikh Ahmed bin Saeed Al Maktoum, both the Emirati captain and the first officer have over 7,000 hours of flying experience each.

Emirates said it is fully collaborating with local authorities to determine the cause of the incident.

The nationalities of passengers and crew onboard:

All takeoffs and landings at Dubai International Airport were temporarily suspended, but operator Dubai Airports announced that departures would resume at 6.30pm local time.

Read for details about Emirates flights:

Pictures and videos on social media showed the aircraft engulfed in a plume of smoke.

A source said that the issue was a “landing gear failure” because of which the airline was forced to do a “belly-landing.”

The source also stated that passengers were forced to use the emergency exit, with poor weather conditions hampering rescue efforts.