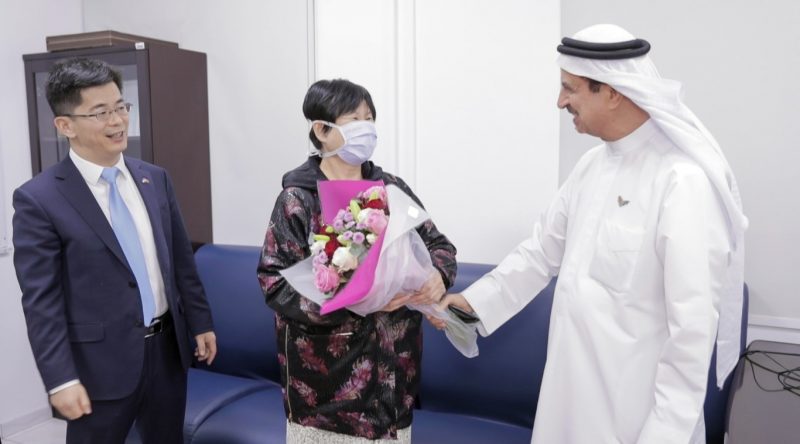 The UAE has reported that a 73-year-old woman from China, who was infected by the new coronavirus, has now “fully recovered”.

Liu Yujia, who was admitted into hospital care in the UAE, no longer requires specialised medical care, official news agency WAM quoted the ministry of Health and Prevention as saying on Sunday.

“Liu Yujia has recovered fully and can carry on with life normally,” it said.

The Chinese national, who was treated at an isolation ward from January 23, expressed her appreciation to the UAE for the medical attention she received.

She also said she was thankful for the care provided to her family members – including her nine-year old granddaughter – who were also tested positive for the new coronavirus.

“The results of the 2019-nCoV detection test conducted on the patient turned out negative of the new coronavirus. She is now in a good health and fully recovered,” WAM quoted Dr. Hussein Al Rand, assistant under-secretary for Health Centres and Clinics at the ministry of Health and Prevention as saying.

He added that the UAE has taken all the necessary measures to deal with the coronavirus cases. So far the UAE has reported seven cases of the virus – including four from Liu Yujia’s family, a Chinese national who came from Wuhan, another Chinese national and a Filipino.

“This case of the Chinese lady increases hope that other discovered cases in the UAE can also be fully recovered,” he added.

The coronavirus has continued to spread rapidly worldwide, with the death toll reaching 910 and the number of confirmed coronavirus cases in mainland China crossing 40,171.

The director-general of the World Health Organisation (WHO) Tedros Adhanom Ghebreyesus said in a tweet that there have been concerning instances of coronavirus being spread from people with no travel history to China, saying “we may only be seeing the tip of the iceberg” when it comes to the virus.

“The detection of a small number of cases may indicate more widespread transmission in other countries,” he said in the tweet.

As I told media yesterday, #2019nCoV spread outside #China appears to be slow now, but could accelerate. Containment remains our objective, but all countries must use the window of opportunity created by the containment strategy to prepare for the virus’s possible arrival.

He called on countries to step up efforts to prepare for the coronavirus’s possible arrival.