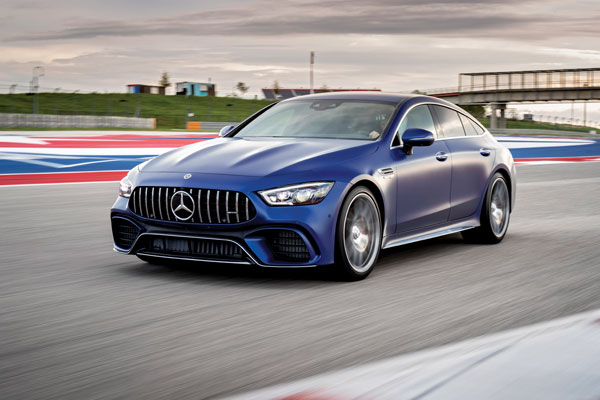 This is laugh-out-loud fun. We’re at the Circuit of the Americas – which hosts the US round of the Formula One championship – and, up ahead, five-time German touring car champion Bernd Schneider is flinging his silver Mercedes- AMG GT R around the track as though it’s a qualifying session for a Deutsche Tourenwagen Masters (DTM) race.

I’m perched in the brand- new AMG GT 63 S 4-Door and doing everything possible to keep up with the German race ace that is serving as our pacemaker in the low-slung two- door coupe. On paper, the odds are very much in Schneider’s favour, given that the luxury- lined saloon I’m driving stretches more than 5m in length and weighs over two tonnes. Yet the GT 63 S 4-Door hustles around the circuit with deceptive pace and agility. It’s performing well beyond my expectations of a big luxo chariot that can seat up to five occupants and stow 461 litres of luggage. 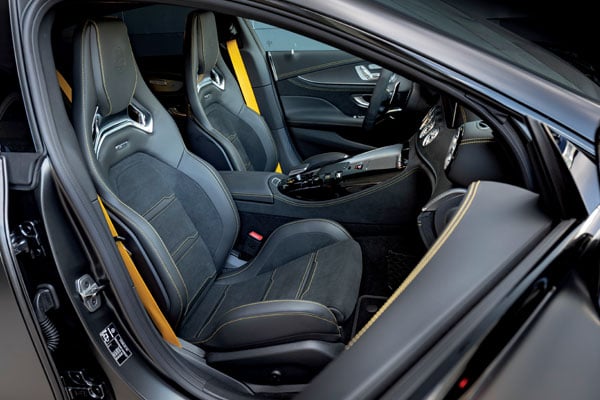 The new Mercedes- AMG saloon flagship was conceived to fulfil a specific job description – to take on the Porsche Panamera Turbo while leveraging the cachet of the two-door AMG GT that sits atop the three-pointed star’s high-performance range. That said, the GT 4-Door has more in common from a mechanical point of view with the E-Class than the two-door GT, as the aluminium spaceframe chassis of the latter could not be stretched to the shape and dimensions required of a large four-door saloon with a spacious boot.

But it wasn’t just a case of slapping a new body on the existing E-Class architecture and rolling the car out. The GT 4-Door is the only sedan to be prepared in-house by AMG, and although the starting point was an E63, a wholesale revamp of the chassis and underfloor has been carried out to justify affixing a GT badge. 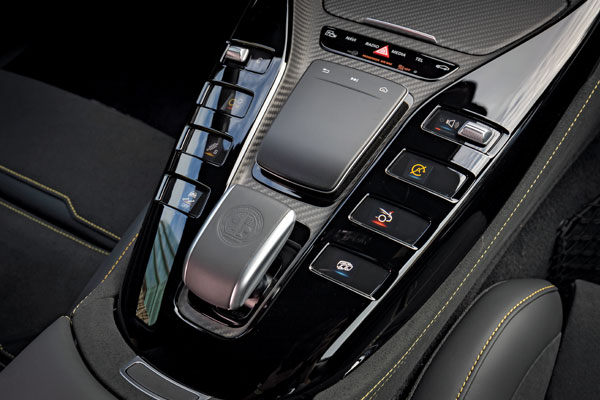 Another key differentiator between the GT 63 S 4-Door and its siblings is the fact that stuffed under its menacing snout is the most potent version to date of AMG’s familiar 4-litre twin-turbo V8. Thumping out 640hp and a mind-numbing 900Nm of twist, it propels the two-tonne- plus sedan at the horizon with organ-compressing violence.

A 0-100kph split of 3.2sec and a top speed of 315kph is hardly sluggish but, more than that, it’s the huge wave of torque on tap from 2,500rpm onwards that really grabs your attention. It’s a large part of the reason why the GT 4-Door feels about 300kg lighter than it actually is.

Read: This $2.25m Speedtail is the fastest McLaren ever built

Naturally, deploying this massive grunt without frying the tyres or making the GT 63 S an unruly monster requires a chassis that’s exceptionally well tied down. To this end, the AMG brainiacs have thrown every possible bit of tech at the car, including four-wheel steering, adaptive air suspension, rear- biased 4Matic+ four-wheel drive and an electromechanical differential that’s somehow able to make sense of massive torque and huge cornering loads applied simultaneously.

We already  know the four- litre twin-turbo V8 well from other Mercedes-AMG models, but in the GT 63 S it’s positively monstrous. The turbocharged V8’s massive low- and mid-range grunt rockets the big sedan out of corners, with satisfying drifts to be had if you so choose – although the car’s natural tendency is towards gentle, progressive understeer as you push towards its limits of traction and lateral adhesion. 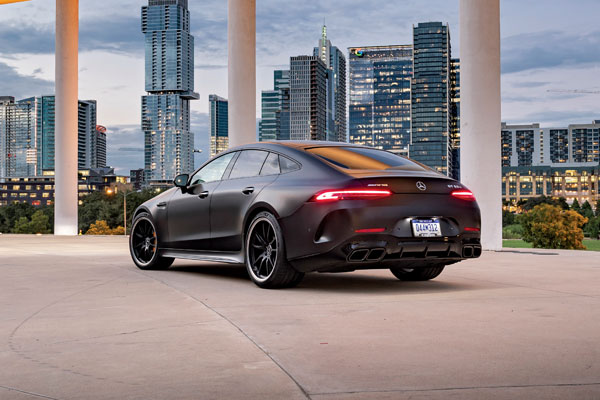 Even more importantly, the AMG GT Four- Door is also a relatively refined and comfy proposition in real-world conditions. We discovered this during a road loop earlier in the day that saw us trickle out of morning traffic in downtown Austin, Texas, before tackling highways and winding country roads. Slotting the drive mode in its comfort setting results in the GT 4-Door morphing into an agreeable cruiser. The exhaust that’s so raucous in sport+ and race modes recedes into the background, with nothing more than a muted bassy rumble permeating the cabin.

The dash layout isn’t dissimilar to the Mercedes CLS, with a full 31.2cm wide-screen digital display, doubling as the instrument cluster and the infotainment screen, with a virtual speedo that’s calibrated all the way to 360kph. High- end mod-cons include a Burmester surround sound system and LED cabin lighting that can serve up no less than 64 ambient colours for the interior. The turbine-mimicking air vents are also a nice touch, as are the aluminium-look highlights in the steering wheel spokes, door trims and seatbacks.

My preconceived notion before driving the GT 4-Door was that the newcomer represented little more than some opportunistic, marketing- driven niche plugging by Mercedes and AMG. I’m happy to have been proven wrong. They’ve left no stone unturned in maximising the performance potential and everyday usability of the GT 63 S 4-Door. It’s mighty on a racetrack, yet perfectly agreeable as everyday transport. Wunderbar!

World’s first AMG Store to open in Dubai this year