‘The biggest market  for Montblanc in the GCC is the UAE’ 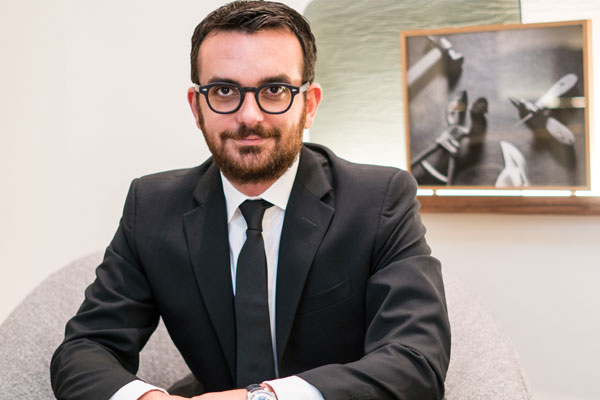 When I meet Franck Juhel, president  of Montblanc for the Middle East, Africa  and India, on the second floor of the $12,000-a-night Villa Koroni at the Costa Navarino resort in Greece’s southern Messinia region, he doesn’t look one bit rushed.

This is a man who, tasked with overseeing 33 markets, knows much more than many of us ever will of multi-tasking and time management. He’s just made  his way upstairs from a series of back-to-back private meetings that morning with collectors from Dubai, Johannesburg, Riyadh, Chennai and Kuwait City, all  of whom are there at the invitation of Montblanc to celebrate the launch of the Homer Writers Edition.

These are Montblanc’s most prolific fans – some third-generation collectors, others newly-minted collectors who have already amassed collections worth a small fortune.

The Writers Edition, which is now in its 27th year, is an ultra collectable line. Each year, Montblanc pays tribute to writers from Virginia Woolf and Franz Kafka to William Shakespeare and Leo Tolstoy. This year’s pen pays tribute to Greek literature legend Homer.

The matte black version of the Homage to Homer, which starts at Dhs3,065 ($834) is available as a fountain pen, rollerball and ballpoint and has a stylised version of the silhouette of a Trojan horse on its black resin body, while the nib has an engraving of Odysseus’ helmet. There are champagne gold trimmings on the body too and the clip is a nod to Achilles’ spear.

A second variation is the Homage to Homer Limited Edition 1581, priced at Dhs16,200 ($,4,410), in which the black has been replaced by Greek coral paired with champagne gold trimmings. The silhouette of the Trojan horse is in gold and there are engravings of Achilles’ armour on its body and the Trojan horse on its nib. The clip resembles Achilles’ spear and there are two sails on the cap, one representing Odysseus on his way to war and the other his son, who went searching for his father.

Ironically, the previous day the media and some of the collectors were taken to the Palace of Nestor, a 20-minute drive from Costa Navarino, which dates back to around 1300BC and was discovered in 1939. Homer’s Odyssey reveals that it is the Palace of Nestor where Odysseus’ son Telemachus first came calling when he set out to search for his father seven years after the Trojan war ended.

When it comes to choosing the specific number attributed to a limited edition, there’s a method behind each one. For example, the Shakespeare edition was limited to 1531 pieces because that was the year when the Queen gave her seal of approval to Romeo and Juliet.

There are two major departures in the Homer pen that differentiates it from every other Writers Edition instrument before it. “It’s the first time we’ve used the biggest nib from our entire collection, the 149, in a Writers Edition pen. This was because of a request from our collectors to do so. Also, it is the first Writers Edition where we don’t have an engraving of the signature of the writer  as no one has conclusively established the identity of Homer.”

Montblanc was founded back in 1906  at a time roughly coinciding with the birth of the modern fountain pen itself. In the more than 110 years of its existence, the company has branched out smartly into other core categories like watches, leather goods and accessories. But the writing instruments, which are manufactured in Hamburg, remain the brand’s halo product. Interestingly, it is an all-women team, some of whom are third-generation employees within the department that hand grinds the nibs for every Montblanc pen. They test it by making artful number eights on sheets of paper, listening to the ‘swish and the swoosh’ making sure it’s up to scratch.

Apart from the Meisterstück (of which the model 149 remains an iconic one), there are four important collections on the radars of Montblanc collectors. The first is the Great Characters collection, which over 25 years since its introduction has had tribute pieces to one great character each year. A collector from Dubai that I meet the previous day tells me of his Mahatma Gandhi pen, of which the saffron ink is as expensive as the pen itself.

Then there is the more recent Heritage collection, which is an inward-looking line paying tribute to Montblanc’s own loaded history of pens. For example, the 1914 collection under the Heritage umbrella launched four years ago as a take on Montblanc’s pens from that year, which featured soft retractable nibs (in the early 20th century, the company’s famous marketing campaign had a picture of a person wearing  a white coat with a fountain pen in his front pocket claiming that it wouldn’t leak).

The Patron of Arts line is for seasoned collectors, usually limited to 4810 (the height in metres of the Montblanc peak in Europe) or 888 (a lucky number in some Asian cultures). This year’s launch for the collection was the Ludwig II model that celebrated the Swan King.

The fourth core collection is the Writers Edition, which once courted minor controversy. In 1993, Montblanc launched the Agatha Christie edition with the clip featuring a snake – an ominous symbol among the Chinese. Montblanc promptly pulled that edition out and re-launched another Agatha Christie model, this one featuring a dagger in place of the snake.

Franck, one of five regional presidents for Montblanc, frequently meets the CEO, the company’s in-house historian and the head of the artisan workshop that tempers expectations from ambitious ideas to workable solutions. “Between the idea and the product that’s ready to go to market you’re talking of between four-five years. Each product idea is presented to us by the in-house historian and during each meeting we talk about all our limited editions, which are in different stages of production.”

While there are several other competitors in the writing instruments space like Italy’s Visconti, France’s ST Dupont and Japan’s Namiki, Montblanc is the heavyweight champion accounting for roughly 75 per cent of the total market share. “We keep telling ourselves and our teams that although we are the leaders in the luxury high-end writing instrument market both worldwide and the Middle East, don’t act like a leader but act like we’re at No. 2 or No.3 position so that we continuously improve.”

Here, in the Middle East, Montblanc has made significant strides. “The biggest market  for Montblanc in the GCC is the UAE, followed by Saudi Arabia. Kuwait, for example, will not reach in terms of sales what the UAE is today or what Saudi Arabia will be tomorrow. However, what we have seen in the past couple of years is that the knowledge and the collector base of Kuwait has increased significantly.”

It is that growth in the region that has resulted in the release of instruments like the artisanal 65-piece only Ibn Sīnā (Avicenna) earlier this year, which reportedly commands just shy of $50,000 in the second-hand market.

“The biggest share of our products  in the Middle East remains the writing instruments followed by leather goods and watches, with watches growing by double digits every year.”

The focus on the Middle East region resulted in the opening of the ‘Neo-concept’ Montblanc store at the Dubai Mall last year – one of only 15 such stores globally at the time. There’s a collector’s corner at the Dubai Mall store where you can get up close with highly limited-edition pieces that stay there for a short period before circling out to other boutiques globally.

There’s also a nib service where customers use a special writing machine that allows Montblanc to understand their handwriting pattern and recommend a nib for the specific style of writing. You can order a bespoke nib and if money is no bar, as is often the case with the full-blooded collectors, you can opt for an all-out bespoke writing instrument too, which can take up to 18 months to craft at the Creation Privée department in Hamburg. During this process, clients can check-in on the progress via video calls with the artisan working on their unique piece.

Collectors, as Juhel explains, collect primarily out of a passion to begin with but are often mindful of the financial value of their collection as well. “We have a collector here [at the resort in Greece] who buys two of each. One to use and the other to keep in the safe,” says Juhel.

With millions of dollars worth of writing instruments circulating in private hands, Montblanc has a robust mechanism to make sure that the counterfeit industry is kept under check.

“Our maison falls under the Richemont Group, which has legal teams in Geneva, London and Asia and takes action against counterfeiters. This isn’t something that will disappear tomorrow, but we have to fight it as much as we can every day.”

With the interview drawing to a close, I can hear another set of animated collectors making their way into the living room waiting for Juhel to join them. There are prototypes of upcoming models and other concepts that are still just pictures on  his smartphone.

“We want our collectors to know first hand what is coming before anyone else, and I wouldn’t feel comfortable if one of them learns about our next product on Facebook or Instagram,” he says.

By letting these collectors in on closely guarded projects, Juhel is not only whetting their interest, but also gauging feedback that he will channel back to Hamburg.

“Most of the time, collectors know more than we do. When I meet a collector, I will learn something about Montblanc from him because that person has been a collector for the last 30 years.”

How Montblanc is countering the economic fallout of the pandemic