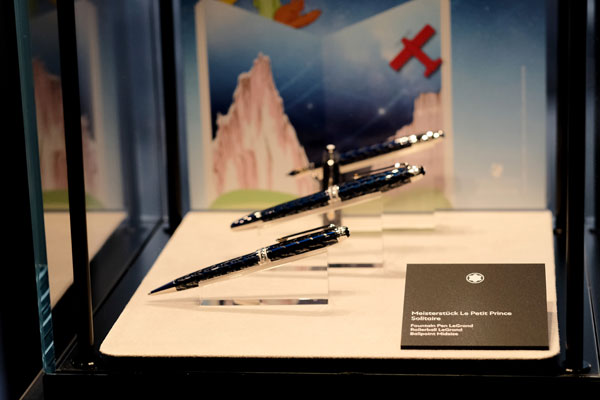 Alserkal Avenue in Al Quoz is where the cool brands set up shop. From radical watchmaker MB&F and vintage auto trader Nostalgia Classic Cars to a host of art galleries, this is where experimental brands plant their flag.

Among those who are present here is Inked, a warehouse-style restaurant, which is all about conceptual and creative presentation. This was the perfect space then for Montblanc to throw a Le Petit Prince-themed party last night.

Read: Exclusive: Montblanc CEO on why Dubai is growing

The Meisterstück pen was first created back in 1924 in Hamburg and it has since been reserved for only the top-end of Montblanc’s writing collection. The nibs are all handmade and there are over a 100 steps involved in the assembly and testing of each Meisterstück pen.

Guests at the launch event of the Meisterstück Le Petit Prince collection in Dubai had an image of an invisible fox stamped on their hand the moment they entered, which became visible only under a UV flashlight (foxes are primarily nocturnal animals).

The fox is one of the central characters in Saint-Exupéry’s book. It is the fox who teaches the young prince his first lessons about love – the prince is in love with his rose – and the responsibility that comes with creating these bonds.

This would explain the laser-engraved words found on the crown of the Meisterstück Le Petit Prince Special Edition pen: “Creer des liens?… Tu seras pour moi unique au monde” (meaning, “To establish ties?…To me, you will be unique in all the world”). For the first time ever, Montblanc used the night-blue resin on the cap and barrel of one of its pens.

The Meisterstück Le Petit Prince Doué Classique Edition – available in versions of a ballpoint, rollerball and fountain pen – has an 18k bi-colour nib with an image of the prince and the fox on it. While the fox pattern covers only the platinum-coated cap on the Prince Doué Classique Edition, it covers the cap and the barrel on the Meisterstück Le Petit Prince Solitaire Editionwhich is also available as a ballpoint, rollerball and fountain pen.

To anyone who claims that the art of handwritten letters and notes is archaic, hand them one of these Meisterstück Le Petit Prince instruments to turn them.

‘The biggest market  for Montblanc in the GCC is the UAE’