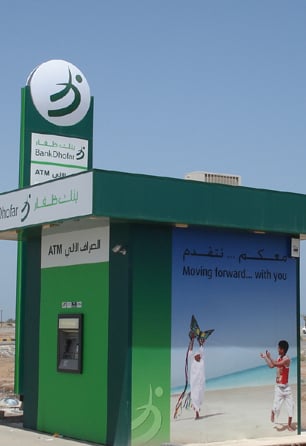 Bank Dhofar, Oman’s third-largest bank by market capitalisation, swung to a net profit in the first half, after taking a one-off provision in the same period last year which pushed it into the red.

The lender made a profit of 19.5 million rials ($50.6 million) in the six months to June 30, according to a statement to the Muscat bourse on Wednesday. In the same period last year, the bank reported a 4.6 million rials loss.

First-half profits in 2011 were hit by a 26.1 million rials provision the bank took after it lost a court case with HSBC Bank Oman and Ali Redha Trading and Muttrah Holding over the ownership of 1.9 million Bank Dhofar shares.

The second-quarter profit for Bank Dhofar was 10.1 million rials, according to Reuters calculations. The lender only published first-half results in 2011, meaning there was no quarterly breakdown to enable a comparison to be made.

The number exceeded the average of two analysts polled by Reuters, who expected a profit of 9.1 million rials for the quarter.

Loans and advances rose 24.1 per cent during the first half of the year to 1.61 billion rials, up from 1.3 billion rials at the same point in 2011. The end-June figure was 1.9 per cent higher than the 1.58 billion rials recorded at the end of the first quarter, according to Reuters calculations.

Shares in Bank Dhofar have fallen 8.4 per cent year-to-date, compared to the main Muscat index which has dropped 3.3 per cent.

National Bank of Oman, the sultanate’s fourth-largest lender by market capitalisation, posted a 13.2 per cent rise in second-quarter net profit, edging slightly ahead of analysts’ expectations.

The lender made a net profit of 10.3 million rials ($26.8 million) in the three months to June 30, according to Reuters calculations based on a statement to the Muscat stock exchange on Monday, up from 9.1 million rials in the same period of 2011.

First-half profit at NBO was reported as 19.9 million rials, a 16.4 per cent increase from the 17.1 million rials recorded for the same period in 2011.