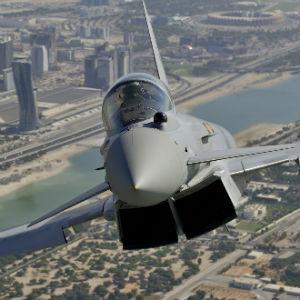 Britain’s BAE Systems believes the United Arab Emirates has “real and genuine” interest in buying 60 of its Eurofighter Typhoon jets instead of the French Dassault Rafale.

“I think the interest is real and genuine as does the British government and we are working hard to put a package together for 60 planes for the UAE,” BAE Systems’ business development director Alan Garwood told Reuters at the Farnborough Air Show on Tuesday.

“We could tell by the questions they (the UAE government) were asking us that they were serious.”

The UAE was expected to finalise a $10 billion agreement with Dassault last year but the talks faltered after the UAE said the terms were uncompetitive and unworkable.

Garwood said the British government’s improved relationship with Abu Dhabi, the failure of talks with Dassault and recent new business wins for BAE in the Gulf state make it confident it can clinch the deal.

Stealing back the UAE deal would be a coup for BAE’s Eurofighter consortium which earlier this year lost out on a $20 billion deal to sell 126 fighters to India which chose the Dassault Rafale as their preferred bidder.

The Eurofighter consortium is made up of BAE, Italy’s Alenia and European aerospace and defence group EADS.

Garwood said BAE would also look to tie up a deal to sell 12 Typhoon jets to Oman by the end of the year.

“We’ll start formal negotiations with Oman towards the end of August I would imagine. The two governments have targeted it for completion this year and we want it done this year as well,” he said.

“I see no reason why we shouldn’t be able to do that.”

Analysts estimate the sale, which Reuters last week reported was close, could be worth up to $2 billion.

Malaysia is considering buying up to 36 Typhoon jets as well, said Garwood.

The British weapons maker is also battling it out with U.S. rival Lockheed Martin for a $10 billion contract to provide a fleet of new training jets to the U.S. air force.

If successful, BAE, which is working on its bid with American firms Northrop Grumman and L-3, could provide the United States with 350 of its Hawk training jets. A decision over the T-X programme, as it is known, is expected by 2014.

“The funding is there for this apparently … We’re in for it and we are confident that the system can yield very high pilot output for the United States,” said Garwood.

BAE, battling shrinking European and American defence budgets, has been forced to cut thousands of jobs at home and abroad due to public spending cuts in recent months.