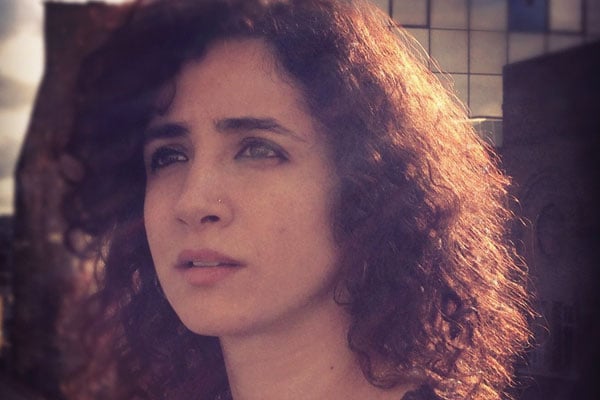 The work of Tania El Khoury has been labelled in many different ways. Theatre, performance, visual art, sound art, protest, even info-activism. Anything other than what it actually is.

“It’s interesting for me that different people call it different things,” says El Khoury. “I find live art to be more inclusive of the things that I use. But it doesn’t matter to me that much if they don’t really understand that term or use something else.”

El Khoury is a Lebanese live artist, creating interactive installations and performances in which the audience is an active collaborator. If you haven’t heard of her yet, you soon will.

In September last year she won the 2017 ANTI Festival International Prize for Live Art, the world’s only international prize for this frequently misunderstood discipline. In doing so she netted €30,000, one of the most generous awards in the world of art. It’s a sum that emphasises the perceived importance of live art.

Innovative and exploratory in nature, El Khoury’s work is both immediate and challenging. Fiona Winning, jury chair for this year’s ANTI Festival award, noted that: “The sensitivity of this artist’s work in orchestrating audience experience is extraordinary. It stays with us, is sometimes literally written onto us. She has foregrounded some of the burning questions of our time by creating resonant experiences that generate conversation and exchange. Tania’s work is urgently needed and we thank her for it.”

In the interactive sound installation Gardens Speak, for example, the oral histories of ten people killed during the uprising against Bashar Al Assad and buried in Syrian gardens are told through found audio. It’s an installation that involves lying on a grave and listening to the whispered stories of the deceased.

“I came across a photo in the very early days of the Syrian uprising that showed a woman digging in the garden of her home,” says El Khoury. “And there was a comment saying, ‘We are digging graves for our sons and daughters in our own garden.’ I was moved by it, surprised by it. So I started researching, asking friends who were activists inside of Syria, saying, ‘Why would anyone bury people in the garden? What does it mean?’

“It’s not enough that you die, or you get killed by this regime. It follows you. It follows you after you die, it changes the narrative, deciding where you should be buried.”

Gardens Speak, which was produced in 2014, had a show in Boston in November and Miami in December.

“They’re always political because everything is political,” says El Khoury of her work. “The privatisation of the seashore in Beirut is political. Gender violence is political. This is the world that we live in.

“I don’t look for problems, but because I work with interactivity and because I work a lot with public space and with the city, it will be a political act to actually choose to ignore the politics of space, for example – to work in a public space and then choose to ignore the fact that it’s very gendered, that it’s very much privatised, that’s it’s very much elitist.”

Her work with the Dictaphone Group, a collective she co-founded with the architect and urbanist Abir Saksouk, questions people’s relationship with Beirut. Together they have staged performances in everything from cable cars to abandoned railway stations and a fisherman’s boat.

The latter was named This Sea Is Mine, which explored land ownership of Beirut’s seafront, the laws that govern it, and the practices of its users. It did so by inviting people to journey from Ain el-Mreisseh port to Ramlet el-Baida beach, with twice daily performances for five people over a period of ten days. A sound piece, a research booklet and video were also produced.

“Most of the work that we do is very much about research. And I like that,” says El Khoury. “I don’t like just political rants. I don’t like people coming on stage and telling us things should be a certain way. It needs to be informed somehow, it needs to be based on some research that can remain, that people can use for other things.

“When you invite audiences to a particular space and tell them it’s endangered, that it’s a space that has this problematic, they automatically build a relationship with it. You sitting at home, or in a gallery looking at (or understanding rationally) what might happen in Dalieh, for example, is very different to you being in Dalieh, looking at the sunset, and understanding that now you’re here, but later you might not be allowed to be here because someone wants to build a resort. It’s about building collective memory with that space, building relationships with that space.”

It is possible to discern the hint of a London twang in elements of El Khoury’s words, which is understandable considering she has spent much of her time there over the course of the past ten years. She has performed extensively in the city and across the rest of the UK, and has submitted her practice-based PhD thesis on the political and ethical dimensions of interactive live art in the wake of the Arab uprisings to Royal Holloway, University of London.

“I don’t create a piece that is introverted and then invite the audience, as if I’m inviting them to my words,” says El Khoury. “I never do that. It’s quite bizarre for me this sort of relationship. I always think about it in the opposite way. I think about it as an experience of people walking into a space, and then being driven into a journey.