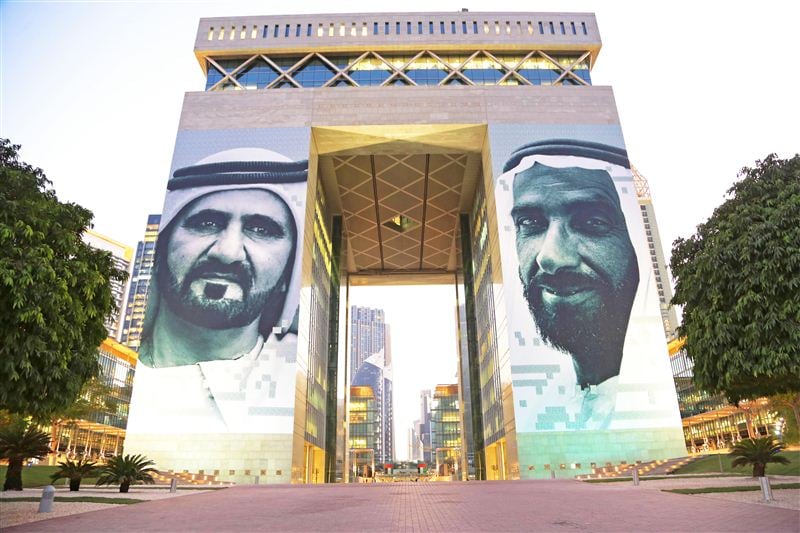 To mark the 46th national day on December 2, the 50×20 metre images portray the Father of the Nation, the late Sheikh Zayed bin Sultan Al Nahyan, and the Vice President and Prime Minister of the UAE and Ruler of Dubai, Sheikh Mohammed bin Rashid Al Maktoum.

The images were created by Emirati artist Maitha Demithan using scanography – a technique by which digitised images are captured with scanners and then used to create printable art.

The work was developed by Brand Dubai, the creative arm of the Government of Dubai Media Office, and the DIFC. It was unveiled shortly after Brand Dubai’s opening of a vast mural on Hatta Dam, representing the late Sheikh Zayed bin Sultan Al Nahyan, and the late Sheikh Rashid bin Saeed Al Maktoum.

Director of Brand Dubai, Maitha Buhumaid, expressed her happiness at the cooperation with DIFC. She said: “The National Day celebrations are a great opportunity to express our love and appreciation for our national icons.

“We will always remember their efforts and hard work to create a strong foundation for this country and ensure its prosperity.

“The idea was to bring together images of two great leaders that changed the history of the UAE, and place them facing each other to symbolise the commitment of the new leadership to follow in the footsteps of the Founding Fathers.”

The artwork is also in recognition of 2018 being designated the ‘Year of Zayed’ by UAE President, Sheikh Khalifa – marking the 100th anniversary of the first president’s birth.

Senior vice president of operations at DIFC Authority, Alya Al Zarouni, added: “Our leaders are our role models in work, innovation and patriotism. DIFC would not be among the world’s top 10 financial centres without the vision of our leadership.”