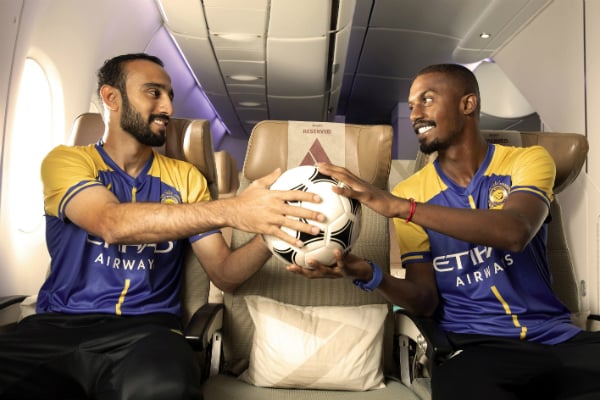 The multi-season partnership with the Saudi Stars League team was signed in Abu Dhabi in the presence of Saudi national team players Mohammed Al-Sahlawi; and Ibrahim Ghaleb; and international stars Ahmed Musa and Noureddine Amrabat.

The deal will see Etihad Airways branding appear on the team’s shirts from its game against Ohod at the Prince Mohammad bin Abdulaziz Stadium in Madinah August 30.

“We have experienced first-hand the growth of Saudi’s inbound tourism to Abu Dhabi and this new partnership reflects the importance of Riyadh and the kingdom of Saudi Arabia to the airline,” said Etihad Aviation Group CEO Tony Douglas.

Al Nassr was formed in 1955 and plays at the King Fahd Stadium and Prince Faisal bin Fahd Stadium. It’s team colours are yellow and blue and it known as ‘The International’ due to its success in global competitions.

Etihad currently operates 77 flights a week to Saudi from Abu Dhabi including three a day to Riyadh, three to Jeddah, four to Dammam and seasonal flights to Madinah.

The airline is currently in the middle of a restructuring after posting a $1.5bn annual loss in June.