The world’s first Warner Bros – branded indoor theme park is on track to open its doors in Abu Dhabi’s Yas Island this summer, its developer has announced.

Ahead of opening, the company has now revealed details about one of its zones – Gotham City. 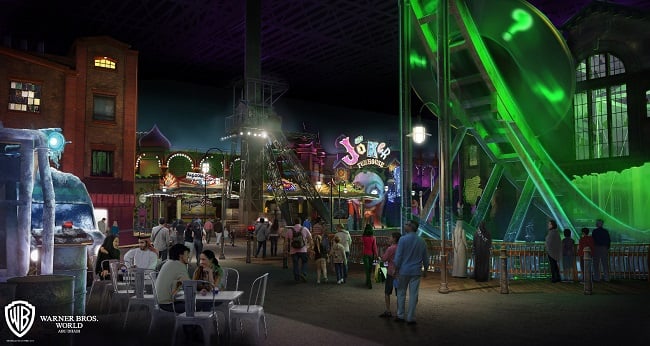 The area will feature four rides and attractions, themed restaurants and memorabilia shops — all inspired by the characters and stories from DC’s comic books and movies.

One of the rides, Batman: Knight Flight, will allow guests to sit on a a robotically controlled flying Batwing vehicle featuring drops, climbs, spins, and rolls. The ride combines a high-tech flight simulator with immersive scenery and special effects.

Meanwhile the Scarecrow Scare Raid will provide a flight experience that will include “dramatic aerobatics and whirlwind barrel rolls”.

Other attractions in Gotham City include The Riddler Revolution — a rocking, spinning rollercoaster and The Joker’s Funhouse – which features a series of physical and mental challenges such as a hall of mirrors, a shrinking corridor, a labyrinth, a hallucination hallway and moving carpets.

The area will also host the Rogues Gallery Games featuring the Hi-Striker, the Whac-A-Bat, the Get-Away Car, the Toxic Blast and the Bazooka Blast.

In terms of food and beverage, Gotham City will include Finest, Hall Of Doom, and Mr. Freeze Ice Scream Truck.

Souvenir shops will also be present in the area.

The developers said information about the rides and attractions to be featured at Bedrock and Dynamite Gulch will be revealed soon, along with the opening date.