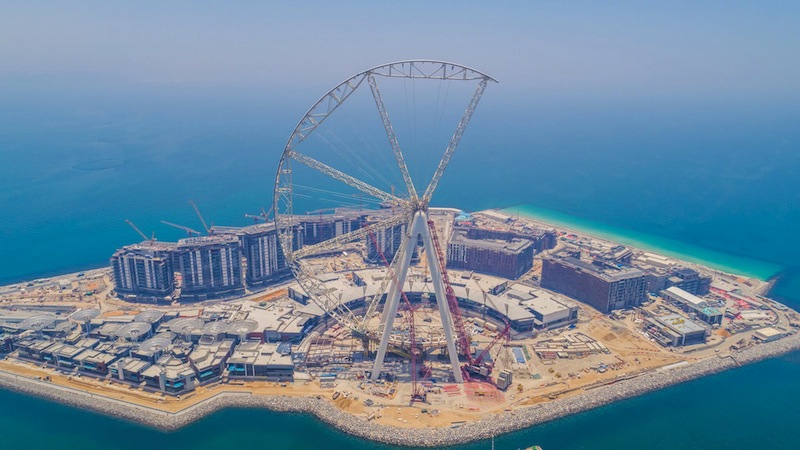 Dubai developer Meraas has announced that work on the world’s largest and tallest observation wheel, Ain Dubai, is continuing to progress.

Five out of the eight 107-metre sections of its wheel rim have been installed, the developer said in a statement on Wednesday.

Located in the Bluewaters development, Ain Dubai will reach a height of over 210 metres – much taller than the 190-metre New York Wheel planned for Staten Island.

The hub and spindle at the wheel were set in place last year and the final structure will include around 9,000 tonnes of steel, almost 25 per cent more than the amount of iron used to construct the Eiffel Tower in Paris, Meraas said. 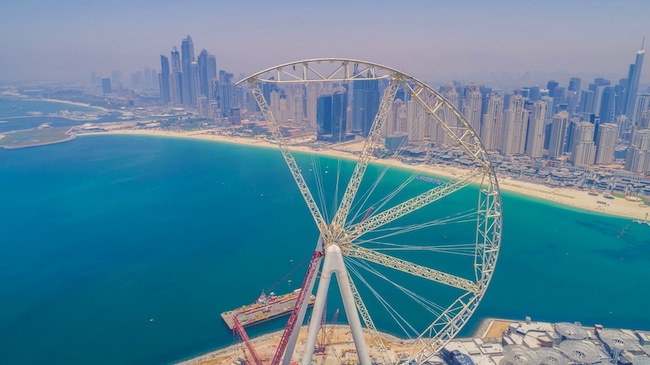 Omar Delawar, chief projects officer at Meraas, said: “The assembly of the rim at Bluewaters is one of the most exciting phases in the construction of Ain Dubai, as it marks the arrival of the centrepiece of the island.

“With the first five sections of the wheel rim already connected to the hub, two winch devices have been fitted to rotate the wheel in a way that will allow Ain Dubai to receive the sixth, and subsequent sections of the wheel rim. Each rim section weighs roughly the same as two Airbus A380 aircraft and must be rested on five temporary support structures connected to the hub, as well as two 115-metre spokes.”

All eight sections of the rim have been manufactured using German and Korean steel and individually shipped to Ain Dubai by barge. They are being maneuvered into position using cranes with a lifting capacity of 3,000 tonnes.

The wheel rim sections are connected to the hub and spindle by 192 heavy-duty cables, each of which is comprised of over a hundred separate wires that are pre-tensioned with up to 300 tonnes of force.

These cables will eventually support the combined 7,500 tonne weight of the rim and its capsules.

The 48 high-tech passenger capsules are being manufactured by Swiss Rides on behalf of the project’s main contractor, Hyundai.

Each 30-square-metre double-glazed capsule is designed to accommodate 40 passengers and is clad in glass with ultraviolet and infrared protection to ensure maximum light and visibility, Meraas said.

The interiors will feature stone flooring and Corian benches with smart climate control and LED screens offering information about the views on offer.

Two motors, located under the floor of the capsules, will ensure stability and a smooth ride as the wheel rotates, said Meraas.

Meraas confirmed that chairman Abdulla Al Habbai led a delegation to Switzerland to inspect the construction of the capsules. The capsules are expected to be installed in 2018.

The developer did not confirm when Ain Dubai will be opened to public.

The wider Dhs6bn Bluewaters Island will feature hotels, residences, 200 retail and dining outlets, entertainment and hospitality attractions and a plaza.

In March, Meraas confirmed that 75 per cent of construction work at the project had been finished.