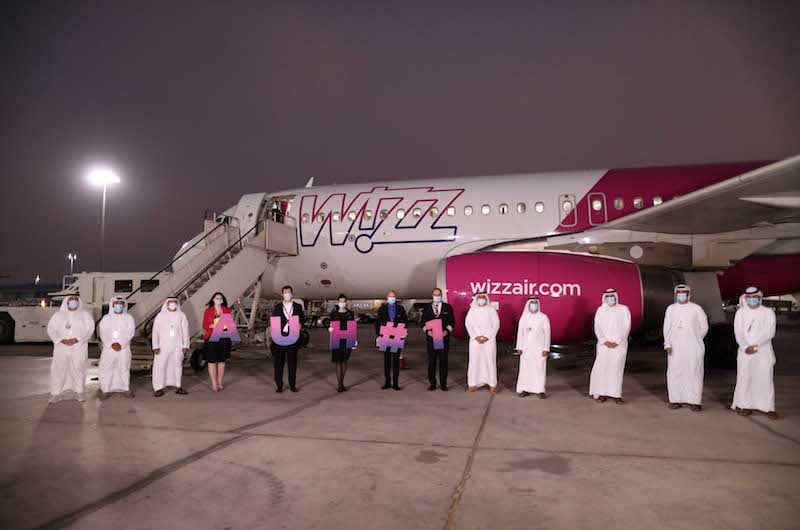 The airline will expand its network from Abu Dhabi to include flights to Sofia, Katowice and Cluj-Napoca in September as it gradually ramps up its operations in the UAE.

“I am delighted to celebrate the first scheduled Wizz Air flight to Abu Dhabi. Wizz Air is committed to growing the airline’s network to the capital of the United Arab Emirates. Our new sanitising protocols will give our customers the confidence that they can safely rely on Wizz Air’s ultra-low fares to visit Abu Dhabi on board one of the world’s greenest fleet. Wizz Air’s ultra-low fares and route network will contribute to the further growth of Abu Dhabi’s tourism sector,” said George Michalopoulos, COO of Wizz Air.

Passengers have been requested to follow physical distancing protocols and to make all purchases related to their flight (e.g. checked in luggage, WIZZ Priority, fast security track) online prior to their flight, to minimise physical contact with staff at the airport.

Onboard, magazines have been removed from the aircraft, and passengers are encouraged to make purchases by contactless payment methods.

“Abu Dhabi Airports has implemented comprehensive health and safety measures across its facilities and is committed to ensuring the health, safety and wellbeing of all passengers and employees. As commercial flights resume and the international aviation industry continues to recover from the impacts of Covid-19, we are looking forward to introducing visitors to everything the UAE’s capital and the surrounding Emirate of Abu Dhabi have to offer,” said Khalil Lamrabet, senior vice president of Aviation Development at Abu Dhabi Airports.

Known as Wizz Air Abu Dhabi, the deal struck between Abu Dhabi Developmental Holding Company (ADDH) and Wizz Air Holdings is for the new airline to be 51 per cent Abu Dhabi owned and to commence operations with a fleet of three new Airbus SE A321neos, increasing to 50 planes over 10 years.

Last month, Wizz Air CEO Joszef Varadi said that the airline aims to have 100 aircraft serving GCC markets in the next 15 years as part of an ambitious expansion strategy.