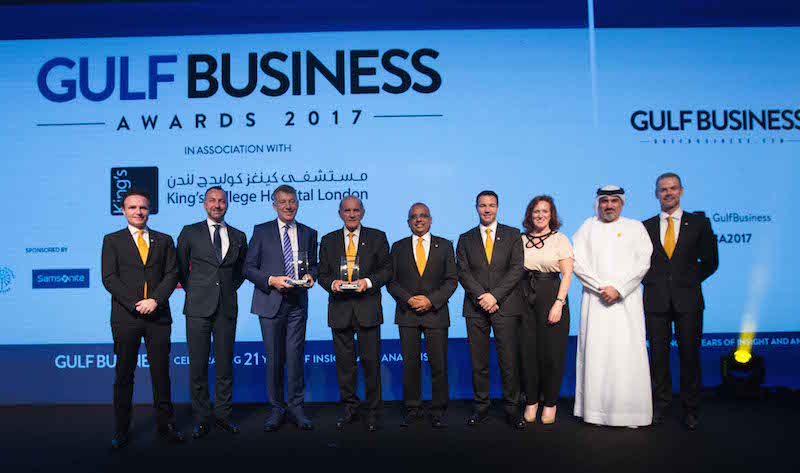 The annual Gulf Business Awards successfully held its sixth edition on Sunday evening with over 300 esteemed guest in attendance at Fairmont The Palm in Dubai.

A total of 27 trophies were awarded to celebrate business excellence in the region.

The awards sought to applaud success and recognised companies and business leaders across nine industries including aviation and transport, banking, energy, real estate, retail and aviation, among others.

For his enormous achievements and ceaseless contributions to the growth of the UAE, HH Sheikh Ahmed bin Saeed al Maktoum, president of the Dubai Civil Aviation Authority; chairman and CEO of Emirates Group; and chairman of Dubai Supreme Fiscal Committee, Dubai Airports and Emirates NBD was awarded the esteemed Lifetime Achievement Award for 2017.

The coveted 2017 Business Leader of the Year was awarded to HE Abdul Aziz Al Ghurair, CEO of Mashreq Bank while the other special award for the evening, the 2017 Gulf Business Company of the Year, was bagged by UAE-based DarkMatter.

Some of the other prominent award winners from the night also disclosed plans ahead, including Paul Griffiths, CEO of Dubai Airports; Shayne Nelson, CEO of Emirates NBD; Colm McLoughlin, executive vice chairman and CEO of Dubai Duty Free; and Rizwan Sajan, founder and chairman of Danube.

Two of the younger award recipients, including Ian Dillon, co-founder of NOW Money – who won the SME of the year award and Emirati film producer and director Nayla Al Khaja, who received the publicly voted Entrepreneur of the year award, also shared their thoughts and plans.

In pics: Gulf Business Awards 2017 – Companies of the year

In pics: Gulf Business Awards 2017 – Business leaders of the year