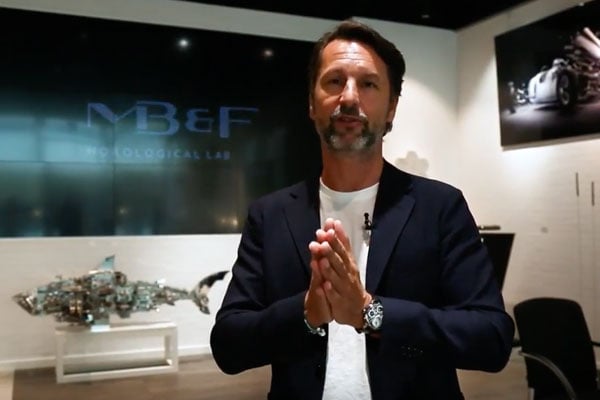 Maximilian Büsser, the owner and creative director MB&F has a single principle that sums up himself and the work he undertakes: “A creative adult is a child who survived.”

Max is affectionately known as Mad Max among the closely-knit community of haute horologists that Max’s been a part of for the last few decades. The former CEO of Harry Winston’s watch division (he was directly responsible for the seminal Opus series of watches), Max set out to establish his own business of watchmaking under the MB&F banner in 2005.

The “F” in that name refers to the friends who he collaborates with on all his projects. Those friends include industry stalwarts like Eric Giroud, Stepan Sarpaneva and Jean-Marc Wiederrecht, among others.

Max is focused not only on conventional wristwatches and table clocks – in fact, there’s nothing conventional about his approach to MB&F – but on a much larger goal of using kinetic art to interpret watchmaking.

That vision has also been accompanied with complete creative freedom to create objects like table clocks with alien sculptures on it (the Fifth Element Clock), mechanical music machines that play Star Trek tunes (MusicMachine 2) or even fierce-looking robot clocks (Balthazar).

The pursuit of kinetic art has resulted in the opening of the M.A.D gallery in three locations across the world – Geneva in Switzerland, Taipei in Taiwan and Dubai here in the UAE.

A few years ago, Max and his family moved to Dubai. They partnered with the Seddiqi family, who was also MB&F’s first retailers in the Gulf, to open up a gallery in Dubai’s Al Serkal Avenue.

That facility has now been relocated to the newly opened extension of the Fashion Avenue in The Dubai Mall.

We caught up with Max on the even of his gallery opening in The Dubai Mall earlier this week where he gave us a peek into some of the most fascinating creations present in the gallery at the moment.

Take a look at the video above to see some of these riveting pieces of kinetic art – better still drop by the gallery at the first chance you get to do so.

Video: Maximilian Büsser on the stunning LMX and the future of MB&F

Gadgets of the month