MB&F is at it again. It’s been 17 years since the brand got off the ground and began to create some of the most audacious – downright rambunctious, some argue – timepieces that visibly demonstrated the displeasure of its founder, Max Büsser, for a lack of innovation in watchmaking among some quarters of the watchmaking world.

It meant that Max and his team have created 20 calibers – with an investment of millions of dollars in the process – in the last 17 years. The 20th movement, revealed just this week, is also MB&F’s first ever chronograph. Fitiingly, it has gone the distance.

Max collaborated with Stephen McDonnell on the new Legacy Machine Sequential EVO that addresses fundamental problems of regular chronographs – not least of which is the “flutter” of the chronograph seconds when activated (McDonnell placed the chrono vertical clutch within the main gear train to achieve this). 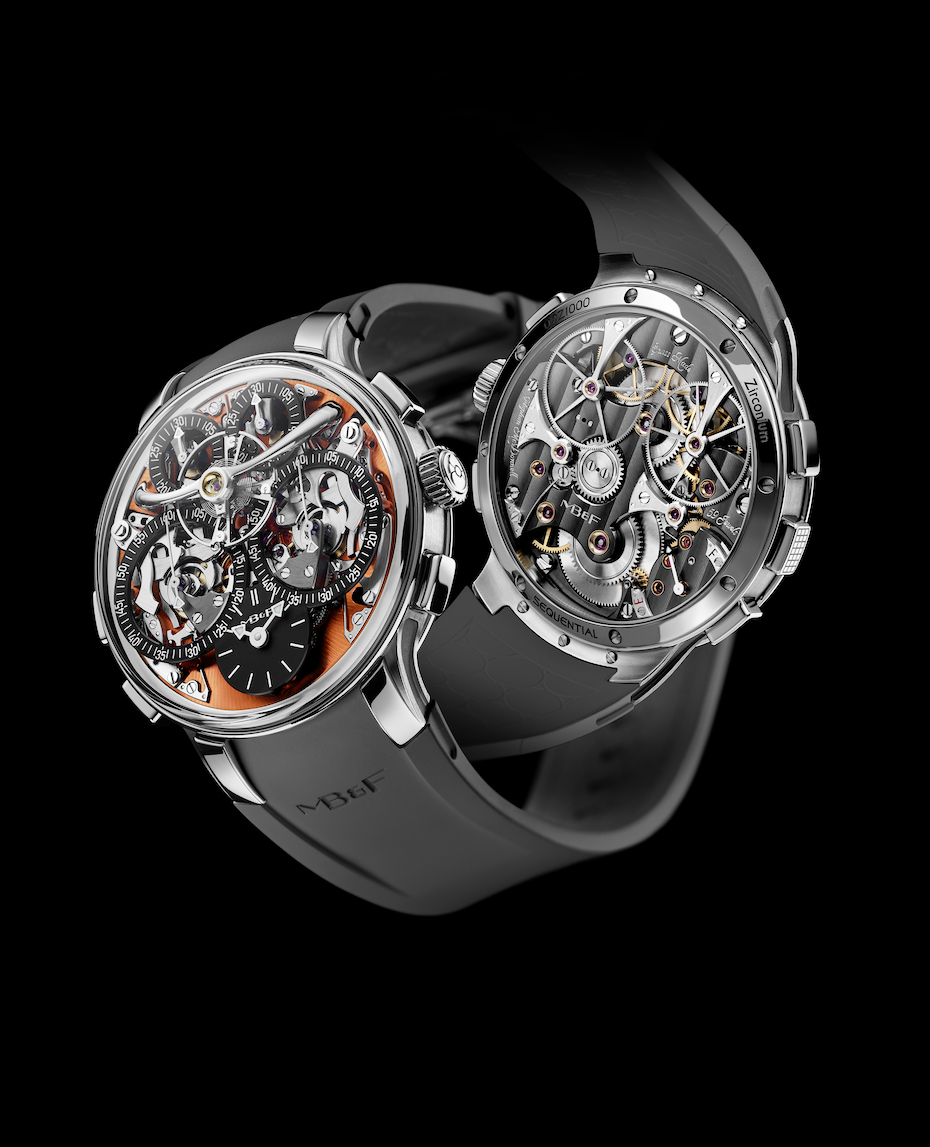 The Twinverter allows you to engage both chronographs on the watch simultaneously. The result with all this technical mastery is that the watch can achieve, in MB&F’s own words, the following functions: “Independent mode wherein it measures the duration of multiple events with separate starting points and end points, even when the events overlap in timing; Simultaneous mode during which it can measure the individual durations of two events that start simultaneously, but have different end points; Cumulative mode that measures the individual cumulative durations of two discontinuous events; and Sequential mode (or lap mode) that measures the individual sub-durations of a single continuous multi-phase event, with provision for sub-durations that last over a minute.”

Our new Machine: hit the link to see the LM Sequential EVO in action 🙂https://t.co/DJIyltiMQj pic.twitter.com/DqCxSx9z0I

There is nothing to take away from the absolute, borderline miraculous, feat of watchmaking ingenuity that McDonnell and Max have combined in this new timepiece. Yet, and the duo can only consider this as a challenge, we’re not sure how the watch will perform as the power reserve wanes (there is no constant force escapement). There are two independent chronographs which are energy-sapping complications that could – as the power on it wanes – have an effect on the time measurement of those chronographs.

Read: Video: Maximilian Büsser on the stunning LMX and the future of MB&F

Meanwhile, there are 585 components that are present within this movement and it took five years of R&D for this watch to see the light of day. It has a case with a diameter of 44mm and a height of 18.2mm, thanks to a brilliant domed sapphire. The case which does not have an exterior bezel is made from zirconium that is lighter than steel and tougher than titanium.

It’s priced at $180,000 and it’s limited by production – if you place your name down for one too, wait in queue for a few years before you get yours delivered to you.

And before we forget, you can tell the time on this MB&F piece too, off a small dial at 6 o’clock. But telling the time was never really the intention of this watch.