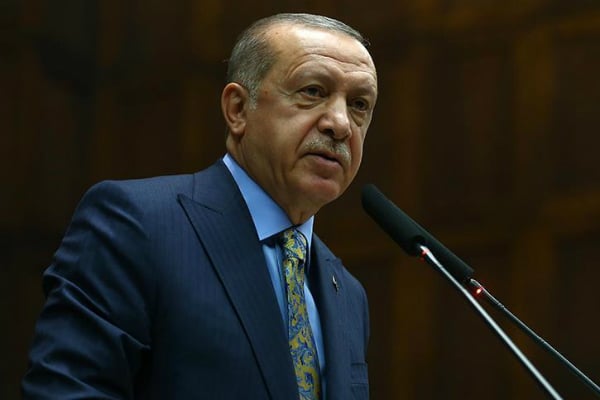 The Trump administration called on Turkey for “an immediate cease-fire” in Syria on Monday as it announced sanctions on three senior Turkish officials and sharply increased tariffs on steel in response to the military operation launched by Ankara last week.

Vice President Mike Pence, speaking to reporters, said that he would lead a delegation to Turkey at President Donald Trump’s request in an effort to stop the military advance. Pence said the US wanted the two sides to negotiate a long-term peace, but he didn’t call for Turkey to pull out of Syria.

“President Trump made it very clear that the United States is going to continue to take actions against Turkey’s economy until they bring the violence to an end,” Pence said. “We want an immediate ceasefire and we want to begin negotiations between Turkey and Syrian defense forces.”

The announcement is an effort to contain the damage from Trump’s decision to stand aside if Turkey entered northern Syria, essentially giving Erdogan a green light to carry out the operation. Erdogan says the offensive is necessary to push back Kurdish militants and resettle refugees, but the rapid advance into Syria has drawn international condemnation and accusations of war crimes.

The penalties would raise steel tariffs on Turkey back to 50 per cent, the level before a reduction in May, and the US would halt negotiations over a $100 billion trade pact, Trump said in a statement. The administration also sanctioned the Turkish ministers of defense, energy and the interior, US Treasury Secretary Steven Mnuchin said.

Experts on sanctions say the administration could have imposed restrictions last week if they had wanted to, and that Trump’s talk of future sanctions is more messaging to satisfy frustrated lawmakers who may have a veto-proof majority to pass legislation and force the president’s hand.

Indeed, the efforts fell short of what many lawmakers considered a strong enough response.

Kaylin Minton, a spokeswoman for Representative Michael McCaul, a Texas Republican and the ranking member of the House Foreign Affairs Committee, said in a statement: “We appreciate the administration’s planned sanctions, but it does not go far enough to punish Turkey for its egregious offenses in Syria.” The statement added that steeper penalties will be pursued.

House Speaker Nancy Pelosi has been working with Senator Lindsey Graham, a South Carolina Republican and Trump ally, to pass legislation that would put harsh restrictions on the country.

“I am fully prepared to swiftly destroy Turkey’s economy if Turkish leaders continue down this dangerous and destructive path,” Trump said in the statement.

“If they knew what they wanted to do, they would have done it already,” said Brian O’Toole, a senior fellow at the Atlantic Council who previously worked in the Treasury Department’s sanctions unit. He called Trump’s announcement “weak” and expects Congress to pass tougher legislation.

Last year, Trump increased steel tariffs on Turkish imports and then cut them in May to 25 per cent. Despite that reduction, imports from Turkey to the US haven’t recovered. US imports of Turkish steel touched 12,749 metric tons in August, down 88 per cent from the same month a year ago, according to Census Bureau data. Turkey accounted for 1.1 per cent of all US steel imports so far this year.

It wasn’t immediately clear why Trump contended that a new executive order was needed to impose the sanctions.

The president also said he would halt trade negotiations with Turkey, which Commerce Secretary Wilbur Ross announced in a speech in Ankara last month. The deal was to include the furniture, marble, autos and civil aviation industries.

Trump’s decision on troop withdrawal exposed American-allied Kurdish militias to attack, risking a resurgence of Islamic State and a slaughter of the Kurds. Kurdish forces that previously fought alongside the US have warned they may no longer be able to secure camps and prisons holding Islamic State jihadists, including Europeans whose home countries don’t want them back.

Turkey’s cross-border military offensive has resulted in the deaths of hundreds of “terrorists” since it began on Wednesday, according to Turkey’s military.

“As we find ourselves in a situation where the president gave a green light to the Turks to bomb and effectively unleashed ISIS, we must have a stronger sanctions package than what the White House is suggesting,” Pelosi tweeted Monday.

The president said “a small footprint” of US forces will remain at Al-Tanf Garrison in southern Syria to fight Islamic State.