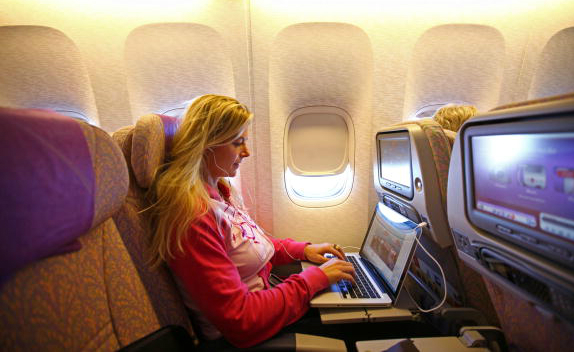 Emirati social commentator Sultan Al Qassemi has accused the US of seeking to rein in Gulf carriers Emirates, Etihad and Qatar Airways through its recent ban on large electronics.

Under the new rules, announced on Tuesday, passengers from 10 Middle East and North African airports are no longer allowed to bring electronics larger than a smartphone in their carry-on luggage when flying to the US.

The airports on the list include the Doha, Dubai and Abu Dhabi bases of the three largest Gulf carriers.

In a comment piece published yesterday on the Middle East Institute website, Al Qassemi said the ban was a “pretext” to hurt Gulf airlines so passengers switch to US alternatives.

“That these restrictions do not apply to other airlines with lower standards safety records means one of two things: either the US ports authorities do not trust the Gulf carriers (all of whom have an impeccable safety record) or, and more likely, that this move was designed to give an unfair advantage to US carriers,” he said.

Al Qassemi particularly highlighted lobbying efforts by several US carriers for amendments to the country’s open skies agreements with the Gulf states.

In February, a number of US airline CEOs pressed President Donald Trump to impose restrictions on Emirates, Etihad and Qatar – which they accuse of receiving more than $50bn in state subsidies.

At the time the request was refused due to the large amounts of business the carriers generate for other US businesses like plane maker Boeing and conglomerate General Electric.

The Partnership for Open and Fair Skies, backed by American, United and Delta, said earlier this month that 1.2 million American jobs are at risk from alleged trade violations by the UAE and Qatar.

“There is no doubt that a significant reason behind the electronic ban is to stifle competition from Gulf airlines, and to encourage US bound passengers to fly on American carriers,” Al Qassemi argued, referencing lobbying efforts by US carriers.

“The lucrative first and business class passengers sector depends heavily on the fact that travellers can work on board flights. Now these passengers will start to look to other non-Gulf carriers as alternatives. This laptop ban is merely the latest in a string of protectionist policies fronted by the Trump administration.”

He added that the measure was the latest US protectionist policy to damage the competitiveness of the Gulf big three after the Trump administration imposed a travel ban on passport holders from Iraq, Iran, Libya, Syria, Somalia, Sudan and Yemen in January.

In an interview with radio station DubaiEye earlier today, Dubai Airports CEO Paul Griffiths said he expected the new restrictions to have a limited impact on passenger numbers.

The airport plans to implement a new check-in system for electronics at the gate for flights to the US, he said, allowing passengers to be reunited with their devices once they have reached their destination.

However, the ban is expected to see business travellers from key markets, including India, seek alternative routes to the benefit of US and European carriers.