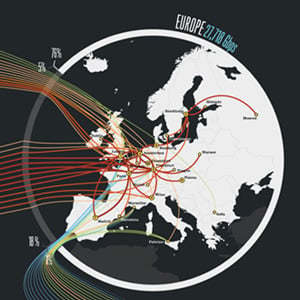 The internet contributes to 8.3 per cent of the UK economy, a bigger share than for any of the other G20 major countries according to a study by the Boston Consulting Group (BCG.

The internet economy was worth 121 billion in 2010, more than 2,000 per person, researchers at BCG said. That made it bigger than the healthcare, construction or education sectors.

The UK also carries out far more retail online than any other major economy. Some 13.5 per cent of all purchases were done over the internet in 2010, according to BCG, and this is projected to rise to 23 per cent by 2016.

The researchers said that the overall UK web economy is particularly fast-growing. They predict it will continue to expand at a rate of 11 per cent per year for the next four years, reaching a total value of 221 billion by 2016. That compares with projected growth rates of 5.4 per cent in the US and 6.9 per cent in China.

In 2010, South Korea, China and Japan were behind the UK, with the internet accounting for 7.3 per cent, 5.9 per cent and 5.5 per cent of GDP respectively. In 2016, South Korea and China are expected to remain in the second and third spots respectively, and India is expected to have about the same share of GDP from internet commerce as Japan.

By 2016, the internet is expected to make up nearly one quarter of all UK sales – the highest percentage of any country, and more than twice the projected internet slice of Germany’s economy, which the report projects will be at 12 per cent of GDP.