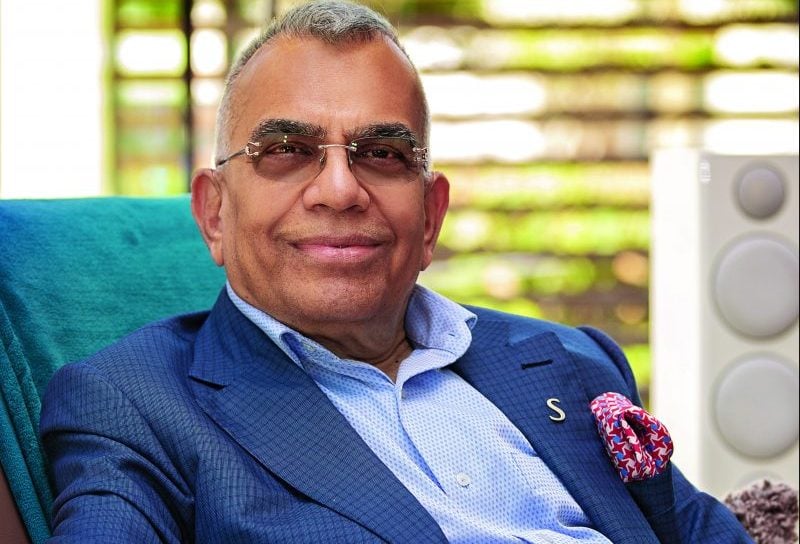 It’s a project which is the launchpad for Sobha Realty to potentially become a $1bn company. Sobha Group chairman, PNC Menon, says, “We currently do $700m. We are not overambitious.”

How does it plan to get there? With an average population growth rate of 5 per cent, Menon says that Dubai’s real estate market size is pegged at Dhs25bn ($6.8bn). Sobha is angling for Dhs2.5bn ($680m) of that pie in its direct real estate business. The other Dhs1bn ($272m) is by way of the group’s ancillary businesses like construction, design and manufacturing which will generate another Dhs1bn. “That together amounts to around $1bn.”

Importantly, this isn’t the only billion-dollar company within the Sobha Group. Menon’s son, Ravi, heads up the group’s India operations which is run independently from the UAE-based company. The Indian arm is already listed on the Bombay Stock Exchange and Menon says that it too will become a billion-dollar company in the next 3-5 years.

And if that wasn’t enough, at the age of 70, he now plans to set up another business – though he has no idea of what it will be.

“I need to find a business other than real estate to make my life, not my living. Real estate is a cyclical business. I should have something that is not too cyclical. One thing that I’m clear is that if the [new] business does not have enough potential to reach a billion dollars, I will not get into it.”

The making of a conglomerate

Sobha began in 1976 as a furniture-making and interior-designing business in Oman that then grew into fitting out government buildings, hotels and even palaces across Oman, Brunei and the UAE. Some of its most significant projects are Muscat’s Sultan Qaboos Grand Mosque, Dubai’s Kempinski Hotel at the Mall of the Emirates and projects in the palaces of Brunei.

By 1995, Menon decided to move the business further upstream and began real estate development by setting up the India division which focused on construction in India. But there were bitter business lessons to be learnt in the country of his birth.

“There’s corruption, political interference, and also governmental interference like tax authorities. They’re like vultures. People in India have started to feel that India is not that great a place for businessmen. While we all have opportunity in India, the process and management of doing business in India are extremely painful.”

By 2011, he decided to return full-time to the Middle East and left his son in charge of the operations in India, while he set up a real estate company in Dubai. They acquired the land at the Mohammed Bin Rashid Al Maktoum City in 2011 and by 2014 began construction.

Construction on the Sobha Hartland Greens apartments was completed in February, and this month the Forest Villas in the Sobha development will be handed over to customers too. 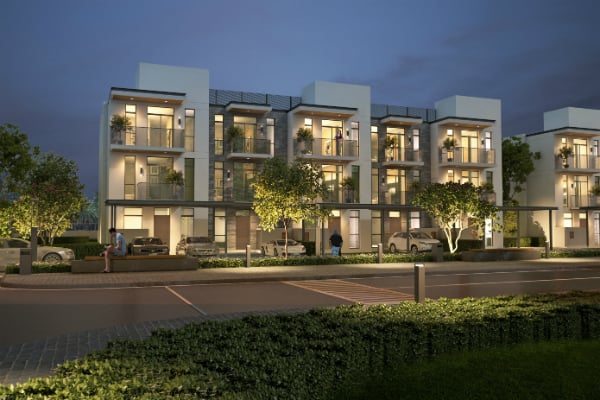 Menon can immediately draw comparisons between the ease of doing business in India and the UAE. “When you come to Dubai, there’s no corruption. There’s a dynamic and proactive government – no one can take one dirham.

Francis Alfred, the CEO and managing director of Sobha Realty adds, “The entire system here is so pro-business and there is extraordinary support from government institutions. If I need an appointment with a government official, all I have to do is to give a day’s notice. They want to understand the industry’s issues.”

Menon doesn’t see the demand for residential property in Dubai waning anytime soon. On the contrary, recent geopolitical factors, he believes, will lead to a growth in the emirate’s population.

“In the new budget presented in India, the super-rich, those with an income of Rs4 crore, will have to pay 41-42 per cent income tax. While I understand socialism where you have to tax the super-rich, it will also affect the growth of the society as these people create jobs and wealth. With such a high income tax, they will move outside India. In Dubai, you can buy a home for one-third, one-fourth of the price in Mumbai and homes that are 10 times better in quality.”

Alfred, along with Jyotsna Hegde, the president of Sobha Realty, have been named as the management successors of the Dubai-based business. 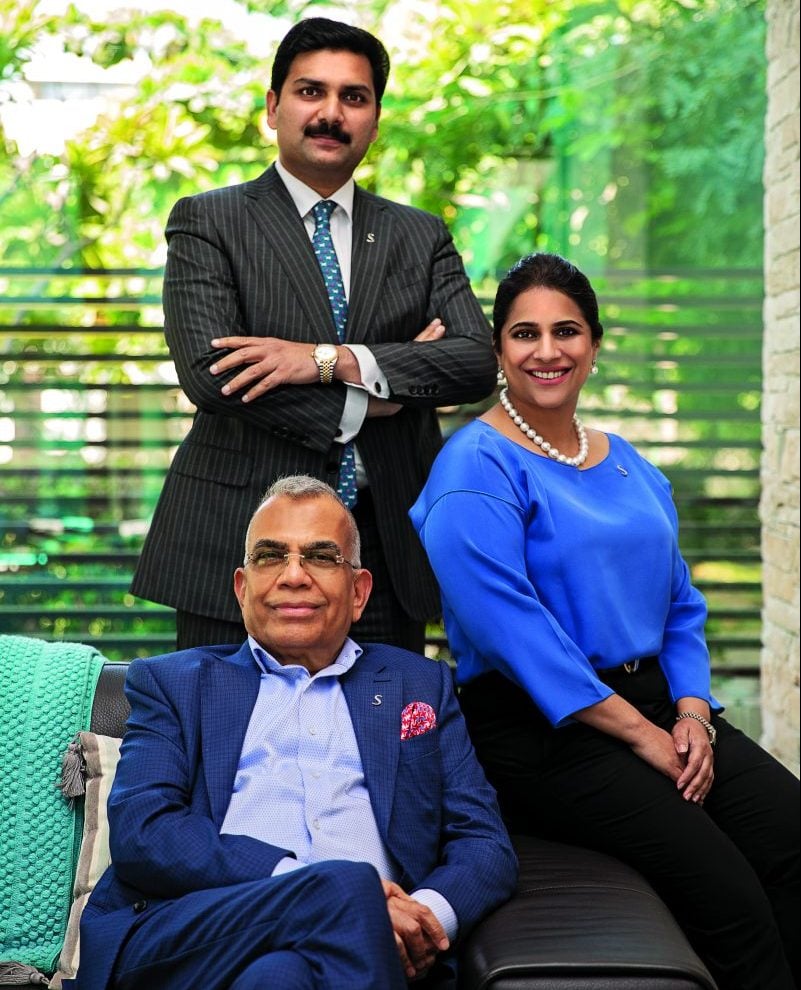 Hegde has been spearheading efforts to rebrand Sobha and lift its international profile. Earlier this year, it opened two new foreign offices.

In February, Sobha opened a sales office in Shanghai, prompted by expectations of Chinese investments in Sobha’s projects to reach Dhs600m by the end of 2019. Already in the first two months of this year, Chinese investment in Hartland climbed 200 per cent.

“China has become a big contributor to this market. Most of the schools now in Dubai have started offering Mandarin as the third language.”

Those schools include the North London Collegiate School located within Sobha Hartland, one of two schools on the premises, among the most expensive educational institutions in Dubai.

In March, Hegde also opened the Sobha Global Studio office in London which overlooks Hyde Park. That move is the first step towards listing on the London Stock Exchange – though the company insists that a listing is still a few years away.

“This is more about building a global brand. London is a thought-out step that puts us on the world map. It’s only a marketing office currently for our Dubai products. Hopefully, over time it could become something else.”

Sobha prides itself as a backward-integrated real-estate company. It has set up entire in-house divisions which support its real estate business. These include a team of 90 architects and engineers in Dubai, a full-fledged contracting team with nearly 4,000 people and a manufacturing unit too that specializes in metalworking and road working projects.

All of Sobha Realty’s real estate projects are concentrated in the UAE for now. Apart from Hartland, in 2013 it announced a joint venture with the Meydan Group, creating the Meydan Sobha Group which is developing an $8bn District One project that will comprise of 1,500 luxury villas also located in Mohammed Bin Rashid City.

But Sobha is expected to expand its real estate operations internationally too. One of the near-term geographies where it will likely expand is Oman. “We’re looking at Muscat. One of the projects is in the early stages of closure. It’s going to be a joint venture – close to a billion-dirham-plus business,” says Alfred.

As the real estate business expands beyond the UAE, Alfred is confident that Sobha can take a well-honed backward-integrated model and implement it internationally.

“We’ve written down a process for everything we do – real estate, construction, design. We standardize things. We have guaranteed results as part of the process – whether we do business here, in the nine cities where we’re doing real estate in India, or anywhere else.”

“When I got married I was staying in a one-room apartment that I divided into three compartments. Today, I live in a reasonably large house in Dubai with 17 staff. I have a private jet and big cars. If someone starts from zero and becomes a billionaire, you’ve done reasonably well for yourself,” says Menon, who signed up to the global philantrophic campaign Giving Pledge three years ago.

But he points out that signing up to the pledge wasn’t his cue to initiate philanthropy.

At the age of 35, when he first began to come across wealth, he decided to, and then subsequently executed, philanthropic programmes of free education, healthcare and poverty eradication in India.

Although the pledge initiated by Bill and Melinda Gates and Warren Buffett can only be taken by billionaires, Menon says that he has suggested to Gates that he look at the well-off middle class too.

“I explained to Bill Gates that he should not only to look at the apex of the pyramid, but the middle [segment] too that is very strong. There was an initiative that Bill Gates and I were planning to do, but I decided not to participate because I’m too old and I would need to spend a lot of time on that.”

The ultimate real estate development that he wants his legacy attached to, is a 60-storey project on Sheikh Zayed Road that he says he’s been talking about for the last 10 years but which hasn’t come to fruition due to “market dynamics”, though one which is definitely “on the drawing board”.

As to how he would like to script the remainder of his role at Sobha, he says, “Let me compete with myself.”