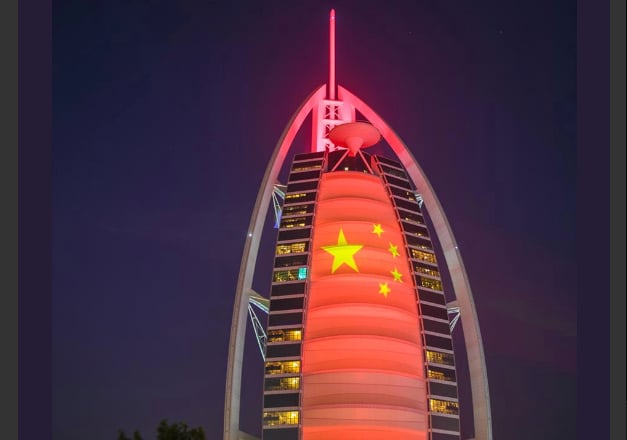 The UAE is getting ready to welcome Chinese President Xi Jinping, who is due to arrive on Thursday for a three-day state visit.

This will be his first visit to a foreign country since he was re-elected in March this year.

To coincide with his visit, the UAE also launched the UAE-China Week from July 17 to 24, aimed at enhancing trade cooperation and cultural exchange between the two countries.

As part of the UAE-China week, Dubai’s iconic Burj Al Arab hotel as well as the recently opened Dubai Frame lit up in the colours of the Chinese flag on Wednesday.

Burj Al Arab in #Dubai lights up in the colours of the Chinese flag for #UAE-China Week, which is being held from 17 to 24 July 2018 in honor of the Chinese president’s visit to the country pic.twitter.com/nTVeyts6cf

#Dubai Frame lights up in red for #UAE-China Week, which is being held from 17 to 24 July 2018 in honor of the Chinese president’s visit to the country pic.twitter.com/b5YbGIJEyu

Abu Dhabi’s Emirates Palace and the headquarters of ADNOC were also lit up in red to mark the occasion.

During his visit, Xi will hold a series of high-level meetings aimed at strengthening ties between the two countries.

An economic forum will also be held in Abu Dhabi on Friday evening, which will be attended by the UAE’s economy minister Sultan Bin Saeed Al Mansouri and his Chinese counterpart Zhong Shan.

Sheikh Mohammad Bin Rashid Al Maktoum, vice-president and Prime Minister of the UAE and Ruler of Dubai, called the Chinese President’s visit a “historic” one that “celebrates the strategic partnership between the two countries and establishes a new phase of fruitful co-operation and promising outlooks”.

“The UAE currently hosts 200,000 Chinese citizens and 4,000 trading companies. We seek to build long-term economic, cultural, and trade and investment ties with China. We are happy to celebrate China’s rich and continued historical culture on an annual basis,” he said in an earlier statement.

Hala China, a joint initiative between Meraas and Dubai Holding launched this week, also aims to improve economic and cultural exchange and increase investment cooperation between Dubai and China.