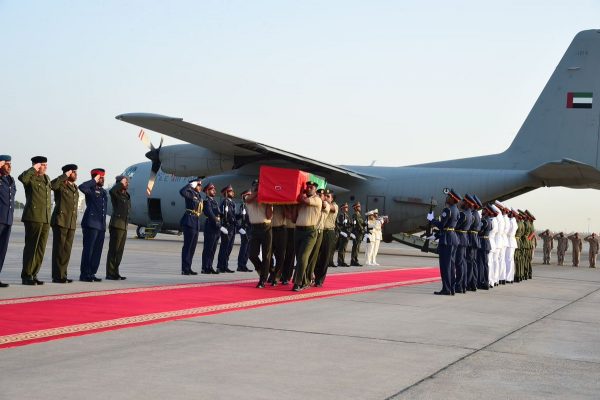 The body of a UAE soldier killed in Yemen has been returned home, state news agency WAM reported on Monday.

He died “while carrying out his duties within the operations of the Arab coalition, led by Saudi Arabia, to back the legitimate government in Yemen”, according to a statement.

The soldier’s body arrived via a UAE army plane at Al Bateen Airport in Abu Dhabi on Monday.

The UAE entered the Yemen civil war as part of a coalition led by Saudi Arabia in 2015 to back President Abd-Rabbu Mansour Hadi against Iranian-backed Houthi forces. More than 10,000 people have died in the conflict to date.

The coalition also launched air raids Houthi strongholds between Hays and Al Jarrahi in the south of Hodeidah Governorate on Yemen’s Red Sea Coast as battles continued between the Yemeni National Army and Yemeni Resistance and the Houthis,

“The raids led to many losses of lives and equipment among the militias, as the legitimate forces blocked their attempts to infiltrate liberated areas,” according to WAM.